It was a couple of weeks ago now, but I haven`t gotten around to writing about it, that we had a visiting horse and her owner. The mare was Andalusian and on her way to Hartpury for the National Show of Spanish Horses.

Whilst she was at the yard she underwent drastic changes to her appearance, which made all the liveries curious.

Which is how we ended up discussing it in depth in the yard at seven a.m. one morning. Pooling our scraps of knowledge, we found out that stallions are presented in a very natural state with long flowing manes and tails, unclipped and majestic, whilst the mares should be presented in a workmanlike state (very sexist according to one lady) – with manes an inch long, clipped docks and tails cut at the hock and trimmed legs. This is also for hygeine reasons, according to a website I saw. The owner of the visiting horse then told us that she had spent the last couple of years growing out the mane and tail, so was finding the trimming process difficult – if it was me I don`t think I`d have bothered to go to the show, I couldn`t come close to hogging Otis! The tack used and the handler`s dress also had to be in line with traditional Spanish clothes.

The show in Hartpury had a number of different classes for all the different Spanish breeds – the usual best of breed, best conformation, best mare, and also the opportunity for owners to have their horses graded. I think this means that a foal born to two parents who are graded 1 is automatically a grade 1 Spanish horse.

However, to throw a curved ball into the mix, I had heard that in order for a horse to be registered with the Spanish Studbook it`s birthplace must be Spain. However I`ve been trying to find out a bit more about this with little success, but I have gleaned that recently the rules have changed to allow horses to be bred outside of Spain, which has encouraged the popularity of the breed. However, if anyone can enlighten me further it would be great!

Spanish horses are most closely associated with dressage (the Spanish Riding School springs to mind), and are naturally good at it as they have uphill conformation and are short coupled, which makes collection and hind leg engagement easy, even though when you first look at them their heavy necks and shoulders suggest that lightness of the forehand is difficult to achieve. Their history is also intricately linked to the military, which in turn influenced classical dressage movements.

Did you also know that most Spanish male horses are left ungelded, and only men ride the stallions and women ride the mares? A client once told me that after he`d holidayed in Spain.

The last we saw of this lady and horse was just before they left for the competition, so I wonder how they fared. I have a soft spot for Spanish horses so may well try and go to one of the breed shows next year to learn a bit more about them and their traditions. Hartpury also put on various parades at the show, which I think would be good fun to watch. 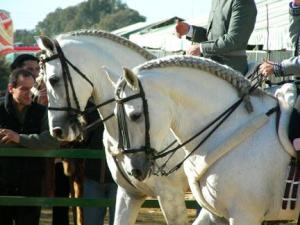 Related Articles that I found interesting: