I hadn`t realised until last week, but I have to admit. I am a mud snob.

Until now I hadn`t really thought about it – I don`t agree with rugging horses unnecessarily so don`t count myself amongst the OCD owners who wrap their horses in pyjamas from fetlock to poll. However, Otis does suffer with sweet itch so wears a fly rug unless it`s raining, in which case I usually put the lightweight turnout on so that he isn`t wet should I be riding that afternoon. Llani has just followed suit, albeit in Otis`s hand-me-downs.

One non-fly days I often take rugs off, and after last week, I discovered that I am very lucky in that neither of them get down immediately to roll. Neither do they find the muddiest patch of paddock to roll. And even if they do roll, they don`t actually rub the mud in – it`s very superficial and usually comes off when they shake after. Although the boys get groomed daily it never usually takes more than ten minutes for them to be immaculate.

So imagine my horror when I went to ride the BFG a couple of weeks ago. He`s 17.2hh grey gelding – heart of gold, but absolutely no idea of his size … or how dirty he gets! 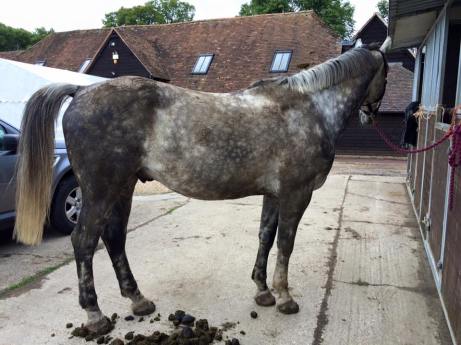 It took me quarter of an hour just to get the saddle area clean! Someone called to me, as I led him to the mounting block (which by the way is the biggest I`ve ever used and I still have to climb up to mount the BFG). Where was I? Oh yes, someone called to me: “Didn`t you have your stepladder to do his bum?”

I shook my head – the saddle doesn`t go there!

Grooming the caked mud off the BFG brought childhood memories flooding back; of scratching a plastic curry comb to break up caked on mud on our ponies` thick winter coats. Of the dust that gets under your finger nails, and in your mouth, turning your clothes brown. I could go on!

Anyway, I had my ride, and seriously considered requesting the BFG wore a rug when I was due to ride…

The week flew by with no more mud incidents … and then this happened!

And that was when I realised.