I taught a very satisfying lesson this morning with a young, cheeky, coloured horse. He’s got some trotter in him and is really more of a pony because he’s so quick on his feet and intelligent. And naughty!

It’s been a steep learning curve for both him and his rider as when I met them in August she lacked confidence and he was nappy, stuffy and tense.

The first few lessons were about the horse learning to move away from the leg and the rider improving her position and correctness of the aids. With this came increased confidence both on the ground and in the saddle, which meant that the horse began to accept her authority and wasn’t quite so naughty. I think his naughtiness came from insecurities as opposed to nastiness, as he always tries his hardest and is very sweet, so his rider needed to show him that the safest place was with her and there was no need to nap back to his friends or fidget on the yard.

Once the rein contact was established and secure, and he responded to the leg, we’ve done a lot on the horse’s rhythm and suppleness, as his rider could apply the leg and he had a contact to seek so could stay relaxed in his neck – he likes to have a high headcarriage and short neck – and the strides became bigger and the gait more balanced.

In the canter we’ve done a lot with riding it forwards so that he loses the shuffly four time beat, and learns to bring his inside hind leg under him. Some shallow loops and transitions within the canter have really helped. Last week I schooled the horse and felt a real improvement in his canter. I did a bit more work on counter canter, which will further help improve his straightness and stride.

So today, after a couple of weeks of jumping lessons, we looked at the flat work again. I found last week he was relying on the fence line for support so I made my rider use the inner track. This meant her outside leg had to be effective and it showed up any wobbles. This got easier as they went through the lessons and the circles became really round, but I’m still going to get them to ride off the track whenever possible.

They were both a bit steady initially but some circles on both reins loosened horse and rider and the trot grew a bit more, but the horse was still looking slightly to the right and was above the bridle so not using his hind legs and back. But I wasn’t worried, it was only the beginning of the lesson.

Once they were both loosened up, and you can tell this little horse is ready to work because on the right rein he drops his nose and starts using his hind leg intermittently, we started work. I had two aims for the lesson. One was to improve the consistency of the hind leg and even up both reins, and the other was to work my rider in sitting trot to deepen her seat so she feels more secure when he’s silly. I’ve wanted to do this for a while but felt the horse needed to be looser over his back and able to keep a consistent rhythm so that they were both comfortable in sitting.

So in sitting trot we rode large figures of eights to identify the differences between left and right rein, and to iron out the tension. You don’t want to think of riding onto the bad rein as this causes you to tense and so the horse will tense and slow down. Short periods on the worse rein means that he can rebalance on the better rein and the trot has limited deterioration.

Still in sitting trot we then used the right rein to feel the hind legs working and then to feel what happened in corners and circles. Soon my rider could feel her horse escaping through the outside shoulder, so we straightened his neck up and used the outside leg and rein to push his shoulder around the circle. She already knows to use the outside leg but I think focusing on pushing the shoulder around helped fine tune the aids. Already you could see her preventing any bulges in the circle and the circles became smaller as he moved so well from the outside aids. With this new ability to prevent him falling out of the outside shoulder it was time to look at asking the inside hind to work. The inside leg on the girth helps push the inside hind underneath the body, which causes the horse to lift his abdominals and back, so dropping his neck forwards and down onto the bridle.

Riding deep corners and circles on both reins helped my rider develop the feeling of pushing her horse from inside leg into outside rein and he was very rewarding as he goes beautifully when the balance is right. She spiralled down on both reins, keeping them both in balance and the smaller circles were much better than usual as there weren’t any bulges as they lost balance through the outside shoulder.

By the time we got to the canter I could hardly tell which rein was the better on, which is great as it means the asymmetry at the beginning isn’t due to a physical problem, the hind leg just needs activating.

In the canter we did the same thing, moving the shoulder round so the hind leg had to step under and support his body, which didn’t curve at the shoulder. This was looking much better, but is something to focus on more when the trot becomes more established and consistent.

Today’s lesson really upped the anti, and the gelding started being a bit naughty and spooking towards the end. He might’ve been getting tired or he might’ve been looking to evade work as it was harder than ydy. The only thing to do here is ride him through that phase so he learns that it’s easier to just do the job, and he did settle down again to finish with some lovely trot – big, swinging strides, longer frame and  nose on the vertical. 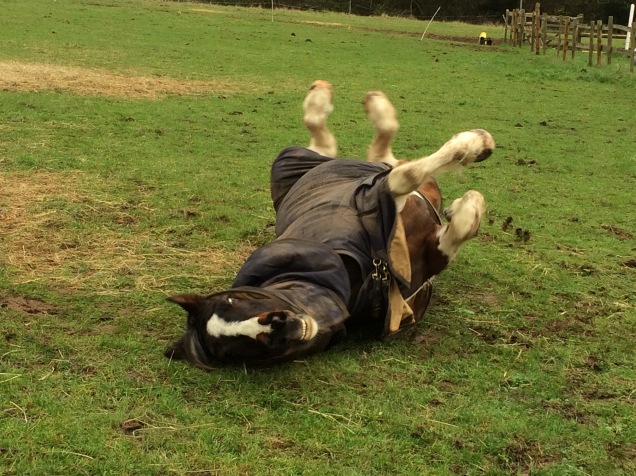 Today was very rewarding as I could see how far they have both come as everything falls into place and they worked together. I’m planning to continue with sitting trot and no stirrups, counter canter, then build on the trot work we had today by making the circles smaller and more frequent, tighter changes of rein.