“Horses are like chocolates, you can never have just one” is a saying that periodically does the rounds on social media. But it’s so true. 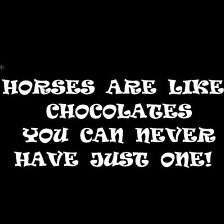 Most people who own a horse at some point own a second, whether it’s a project, the next size up, a youngster, the elderly retired horse. But can we go a little bit crazy and end up hoarding horses?

Of course, this is fine if you want to, but I always remember an excellent piece of advice given to me when training for my stage four exam. My instructor told us that when you have your own yard it is important to have your private horse (for me, Otis) and if you want a project then you should limit yourself to just one, and aim to have it for only six weeks. This was followed by a lot of maths, highlighting how the costs of caring for a project pony rapidly outweigh any profit.

The biggest thing I took away from that lecture was that if you had an empty stable and filled it with a livery, you immediately start getting an income. However, if that stable is filled by a project pony and you are approached by a potential livery then you are missing out on an income. After all, the project pony is not bringing in weekly revenue. Even if a stable stands empty for a month it is not actually costing you anything, unlike a project horse.

So perhaps we horse owners and yard owners should just take a moment to think about whether we really need that extra horse.

Have you ever thought about how much a “spare” horse costs?

For the owner, you have to consider monthly livery costs, farrier, vet, insurance, and feed for starters. That’s not even taking into account dentistry or rugs and the myriad of other costs involved.

A yard owner may not have the incurring livery costs, but I think so many yards struggle financially because their extra horses, which are so easily accumulated because there is no large monthly livery fee, take up field and stable space thus reducing the number of liveries that can be taken. Indirectly they put pressure on the land, which means that forage needs subsidising earlier in autumn until later in spring, generating an extra cost which is often swallowed up and goes unnoticed by the rest of the yard, which has also increased it’s forage requirements.

Although we love our horses, and all equines really, I think it’s so important to consider the direct and indirect costs, pressures on time and relationships (due to less free time at home or fewer days away from the yard) before allowing ourselves to accumulate numerous horses.

I think if the equestrian industry thought more about these incurring costs there would be less indiscriminate breeding and fewer unwanted animals and welfare cases. I’ve put a lot of thought into things, especially after seeing so many articles by the BHS on welfare, and I think if I was ever in a position to need a companion for Otis I would seriously consider a rescue case. I’d be happy with a youngster to socialise and play with; a pony who couldn’t be ridden; or even one with a few quirks which I’d aim to iron out so they could have a more useful life. I feel so sad that there is still, despite years of raising awareness and the horse meat scandal, more and more foals born each year who are of mediocre quality or temperament who will end up discarded in favour of imported horses, or those with more talent, looks, or breed lines. If we were short of equines then I’m sure these foals would have perfectly content and fulfilled lives, but are currently at risk of being neglected. Unfortunately, as a saturated equine country we need to think really carefully about whether breeding from our much loved mare is necessary, or could you go out and buy a suitable horse  – who’s sales fee is probably less than the stud fee and vets costs needed to bring a foal into the world, let alone care for it through foalhood.