Some of you may remember last year I reviewed the fourth book in the Aspen Valley series, Making the Running, by Hannah Hooton.

Well, a couple of months ago I was asked to be a beta reader. This means that I was one of the first to read the book, compare the alternate endings, and provide feedback.

Now the book is officially finished and available to buy (links at the end of the post). I can provide you guys with a review and recommendation. 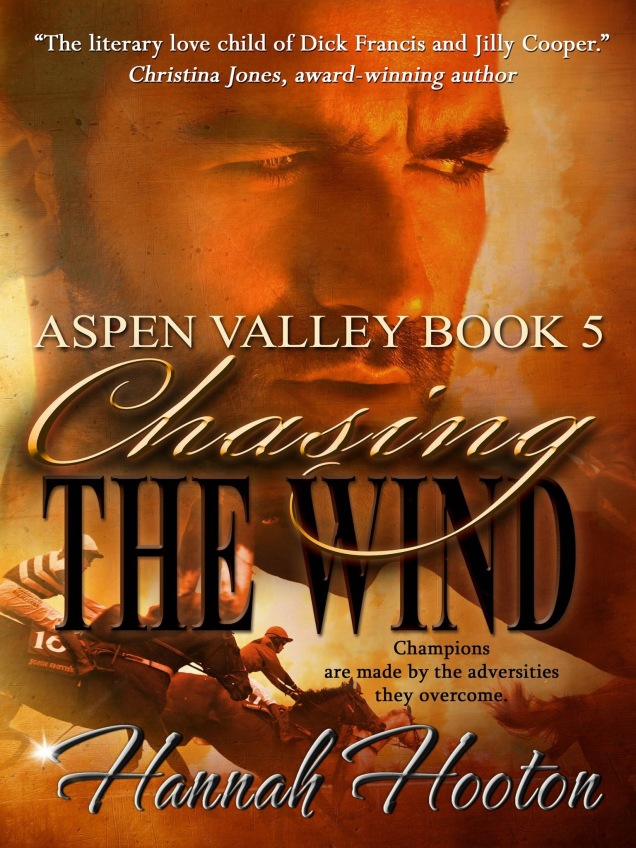 Chasing The Wind is the final book in the Aspen Valley series. Set in Somerset, the series revolves around racehorse trainer Jack Carmichael, his family, his horses, his staff, and his career. The book got off to a gripping start, with the tragic death of Jack’s two-year old daughter, Gabrielle, in the hands (or hooves) of a racehorse, Shenandoah.

Simultaneously, young journalist Lucy Kendrick, arrives on Jack’s doorstep. Already the reader can smell a rat, as we see the edges of her web of lies in her shadow, suggesting that all is not what it seems.

The book follows Jack as he tries to come to terms with his loss; tries to make amends with his devastated wife; battles the horse racing authorities when his reputation is threatened;  finds the perpetrator within his closest; solves the enigma that is Lucy; and all whilst planning his revenge on the unbeatable Shenandoah at the upcoming Grand National.

I would class this book, as with the others in the series, as a romance book, with the backdrop of the horse racing industry. It’s got plenty of witty, comedic moments, memorable and instantly recognisable characters, and is easy to read and to pick up, making it perfect bedtime reading with a mug of hot chocolate.

It is also definitely part of a series. Whilst it can be easily read on it’s own and thoroughly enjoyed, previous protagonists pop up throughout.

What I particularly liked about this book, compared to the previous ones, is that it brings in a few technical elements – having a horse x-rayed for kissing spines, a common complaint of the racing industry, and jump schooling to improve a horse’s technique. To me, it makes the books more realistic and well researched, if not slightly idealistic.

The book has many sub plots, and a couple of traps to fall into, and I was kept guessing until the end. When I thought I knew who Lucy the journalist was, another suspicion was raised.

I will admit, that when I read the ending -which I will not reveal – in the beta version, I was slightly disappointed. It took me from the highs of reconciliation to the lows of retribution. For the end of the series I felt there was something missing. I voiced my opinion in my feedback, and I have to say I was thrilled by the improvements.

In the final version of Chasing The Wind there is an epilogue, which cleverly ties up the series whilst leaving the door ajar if Hannah Hooton decides to revisit Aspen Valley in the future.

The books are available from Amazon, Nook, iTunes, and Kobo.