Recently I’ve done quite a bit of lunging for clients for various reasons.

Teaching a horse to lunge can prove difficult though. Putting you on the ground means the horse can be less responsive or overreactive, and puts you in a more vulnerable position.

One horse that I worked with has no idea what he’s supposed to do, but the problem was that when he doesn’t know what to do he goes to the nearest person!

Turning in to the lunger can be quite frustrating, and a tricky situation to get out of, so we started this cob by walking him smartly along and slowly stepping away from the shoulder, but not getting in front of it. I managed to get him out on a circle after a few tries and quickly went into trot before he thought about turning to me. It’s important if they try to turn in to make sure you’re always in a driving position – behind their shoulder. I didn’t worry about the shape of the circle, the important lesson was for the horse to understand he needed to stay out of my space. Staying in trot helped because he’s thinking forwards and not so much on stopping for a cuddle!

When his owner had a go she had more difficulties than me, which I think stems from the fact they have a closer bond than I do, and he gravitated to her more. It’s important he learns personal space though, and if he looks towards her she pushes him away, with her voice and flap of the arms to show him which space was hers and not his. Even leading him standing closer to his shoulder than his nose and widening the distance between them will improve his understanding of lunging because he will get used to being on his own whilst still being directed by his handler.

So I left them with the homework of practicing leading from the shoulder and having a more purposeful walk so the horse is focused on marching on rather than where his mother is! Hopefully next time we will be able to get him moving onto a circle more easily. I don’t think having someone lead him from the outside will help because the issue is teaching the horse not to cling to his handler. Another alternative is to lunge him with a rider, but the rider is telling him to stay on the circle while he gets used to the idea of having someone in the middle.

I think a lot of your success when lunging depends on how you approach the exercise. After all, you’re in full view of your horse, there’s no deceiving him! I lunged a horse for his owner this week. She said he had been hard work to get trotting on a circle, and charging in at her but she suspected it was her fault. Which is very  honest of her. Anyway, I couldn’t fault him, and I think there are a couple of key areas that give you away when lunging. Firstly, body language is key; if you stand tall, face your horse, and use an assertive, confident voice they will probably pay you the utmost respect. Secondly, the way you hold the lunge equipment will tell your horse how proficient you are. If your lunge line is baggy or your whip facing the wrong way he will take advantage; either by cantering off, going nowhere, or bullying you as this horse did. Having better control over the equipment makes you more efficient which gives the horse less time to think of an evasion. Now, I haven’t seen his owner lunge so I can’t comment, but I suspect the veteran knows just how to wrap her round his little finger. After another couple of lunge sessions with me I hope to give his owner a lesson in lunging, and help her overcome this charging. I think there may be an element of “Mummy’s Boy” as with the cob learning to lunge, so they will have to learn how to be friends, yet have a working relationship too.

So, one trick horses can do when lunging is to turn in or slow down, but my most disliked habit is when they shoot off as you change the rein. I hate this because a buck or kick out can often follow rather too close for comfort. When any horse looks a little fresh when led to the arena, I try to send them off without them knowing, whilst moving as far away as possible! I’m working with a sharp mare at the moment and when I first lunged her I thought she was going to career off. She didn’t, just trotted off. Whilst that isn’t as bad, I still try to discourage it so after the initial five minutes, when the horse’s brain is back in the arena I do some walking on a circle so they learn that they can walk on the lunge. Then I put in some trot transitions to teach them not to rush off, before lots of changes of rein with plenty of walk before trotting ﻿so that they understand the correct procedure. I really value time spent improving this behaviour because you never know when a vet may want to see them trotted on the lunge. He doesn’t want to wait until the five minute canter burst is over!

Teaching a horse to lunge correctly and safely is so useful, and then it becomes an enjoyable activity for you as well as for them because you can introduce poles and lateral work too. If it’s not working for you then invest in some lessons for you and your horse separately. 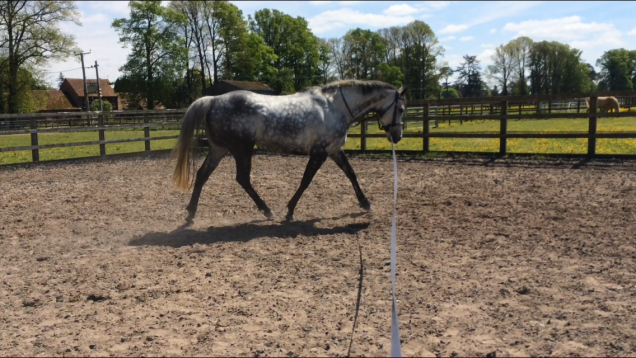 One thought on “Teaching Horses to Lunge”