X-Rays, as with humans, is a useful diagnostic tool to identify the cause of equine lameness. It is used if hard tissue damage is suspected. Although I’ve assisted friends while their horse is X-rayed, it was only in August that I had a horse of mine X-rayed.

Now whilst it’s a useful diagnostic technique, and completely necessary for Otis, I was slightly concerned that I would see something in addition to the problem, or see the early signs of a future problem.

Otis was having his feet X-rayed, so on the level surface of the barn we set up the equipment. A lot of horses need sedating, but my very patient Otis stood perfectly still. His front hooves were placed on wooden blocks, and he had to remain stationary from that point on.

I held him while the vet’s assistant held the panel on the inside of Otis’s left fore, and the vet angled the board so it would reflect the X-rays correctly, before angling the machine and taking a shot. Of his left fore, she took a couple of shots from different angles. This was because his coffin joint is angled so that it points inward. Then she took an X-Ray of the right fore for comparison.

It’s amazing really, that instantly we can study the images, take another angle, or retake the image so that the vet has the best records to analyse later, and to keep for future reference.

What we did find was that there was some sidebone on the outside of Otis’s left fore. I kind of knew it was there anyway because a hard lump developed after an overreach boot rubbed him about eighteen months ago. Anyway, on the X-Ray it looked rather furry, which suggests that it is active. Which could be causing him some pain. Once settled, sidebone usually doesn’t cause lameness, particularly when it is not near a joint, like this lump.

On both coffin joints there was a small spur, which is apparently to be expected with heavier horses who have quite an athletic lifestyle. The image below is not Otis’s, but it’s a fairly clean X-ray which should give you an idea of what a lower leg should look like. 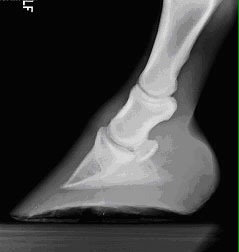 Then the vet decided to X-ray Otis’s right hock… I really didn’t want to because I didn’t want to see any of the numerous hock problems developing that could cause future problems. The vet’s reasoning behind her concern for his right hind, despite the lameness being in the left fore, was that when we nerve blocked his left fore foot his right hind leg started wobbling all over the place!

Much to my relief, Otis’s X-ray of his hock was clean, so we refocused our attention on his left leg and booked the farrier to shoe him with remedial shoes before injecting his coffin joint. Which didn’t solve the lameness, but that is another story!