Last week I wrote for a judge at the riding club dressage competition. I did it with the idea of developing my eye for the standards of novice and elementary movements and help me understand what the judge is looking for.

The most revealing element of all the tests was the giving and retaking of reins. If a horse was resisting the hands or being fixed into an outline then during the giving the horse took his neck out and looked to relax. But when the reins were taken back up the horse immediately tensed and lost the rhythm and impulsion – a bit like driving with the handbrake on. I found it really highlighted poor hands – restrictive, heavy or mobile – because the horse immediately relaxed, went more forwards, with a more freer stride, and with a rounder back when the reins were given away. The difference in some horses was unbelievable. Without the rider’s hands some of them were in the ideal outline for the level of test that they were doing.

As the judge said to me, some riders have very tolerant horses, so get away with riding hand to leg to “fix” the outline. During a dressage test it is the horse being judged and if the horse has done nothing wrong the marks still tend to be good, even though with a change in the style of riding the marks could be far better. However, the giving and retaking of the reins shows that the horse isn’t working correctly, even though at first glance it looks to be a pretty picture. This means that judges can give a fairer assessment of the rider for the collective marks. It also shows the true potential of the horse in terms of length of stride and activity of the gait which then highlights the extent that the rider restricts the horse’s natural way of going, which has more importance from a training point of view.

With this whole business of giving and retaking fresh in my mind, I decided to try to utilise it more in lessons. Conveniently it coincided with my second dressage lesson with Matt, where we checked his level of self carriage by giving away the reins.

Sometimes if a horse is a bit tense they can make you tense – it’s a natural reaction. So giving and retaking the reins can be a reset button. It removes the direct line of communication and enables the horse to relax, and the riders arms to relax, so when the reins are taken back it should be a far more positive picture. So for riders who are tense in their arms, or for horses who are above the bridle, hollow, and tense in their neck, this is a useful exercise to utilise during the warm up.

If a horse is fizzy or unsettled then giving and retaking the reins is a sign of trust. Trust in the horse not to speed up, and trust in the riders own ability not to panic and to relax, so again it can be a useful aid to reducing anxiety and help settle a horse. When settling a horse who is a bit excitable then giving and retaking the reins shows when he has put his mind into his work because he doesn’t speed up or gaze around, and it just reminds the rider to relax to him which helps stop him getting fizzy again.

The ideal way of going is for the horse to be in self carriage, and giving and retaking reins is a simple way to check this during your workout, as well as handing over some responsibility to the horse to carry himself. If a horse is in self carriage their rhythm, balance, and frame should not be lost during the giving of the reins.

Finally, giving away the reins can make a rider far more aware of their other aids and can also make them aware of how much they rely on the reins, either for balance, or for control. Increasing awareness helps create independent, still hands, which will have a positive impact on the horse’s way of going. 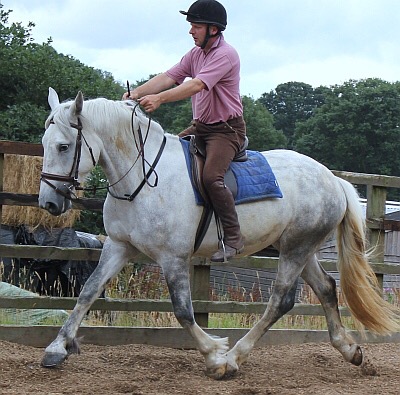