For weeks one and two, click Here and Here.

This weekend was pretty boring, Young Mum went to visit Old Mum, who is apparently convalescing well. The Chauffeur was in charge, which is fine and at least means a day off for me! He did ask me why I called Old Mum old though… well how else can I describe her?! Otis suggested Granny but she’s not that old! And I can’t call her Big Mum because she’s really quite petite. I could call her Short Mum I suppose, because Young Mum is taller than her. But that seems silly too…

It was back to the grindstone early this morning with a flatwork session in the arena. I tried my best at leg yielding, but it really is very difficult! We didn’t do too much canter because Young Mum is still sore from her flying lesson last week. Apparently she says my canter is “big moving” so it hurts more. I think it means I have a nice canter though.

I was a bit chilly this morning so I’ve been upgraded to having an over rug put on at night, and taken off during the day – I feel so spoilt!

I was pleasantly surprised to be brought into my luxury apartment forbreakfast this morning, but I had to watch Young Mum ride that grey lady I had the pleasure of escorting out on my first day here …I did give a squeal of displeasure when they came back to the barn – if she wasn’t so pretty I’d have more than a few words to say about stealing Young Mum!

I stayed in my stable all morning. It was really quiet. Like being in a church, none of the other horses talked! So I nibbled my hay and sipped my water until Young Mum returned and tied me outside Otis’s stable. Immediately Otis started harassing me for a wither scratch. Honestly, he is so needy at the moment!

I was still wondering why I wasn’t in my field, when a lady who Otis told me is very nice came in. She gave me her apple core, which I ate quickly before Otis took it, before stabbing my neck! Then she cooed over how handsome I am (yes, I know) and how lovely it is to see a Welsh Cob who is fit and not carrying excess fat. I blushed with pride – I spend a lot of time working on this figure of mine!

This morning was a bit of a shock to Young Mum and me. She took me for a walk around the block, which I must say was not at all scary and I think I can put of my brave pants and do more of this solo hacking. When we got back in the arena it turns out we were supposed to be dressaging it up with our instructor. So with my nose to the grindstone, I did lots of trotting and transitions and spirals – Why do they have to make circles even harder?!

I was pooped by the end of the lesson, so made sure I had a good roll and made my face all muddy when I got back to the field – it’s my only option of rebelling now that my rug covers me ear to tail!

I was surprised to have Thursday morning off, but even more surprised with what happened at Thursday lunchtime!

Young Mum caught me, brought me in, forced me to scratch Otis’s withers while she brushed me in the empty, silent barn. Then she put my travel boots on – why? No one else was getting ready to go out – and before I’d had time to do even one of my compulsory seven poos she was leading me to a trailer. Not my blue trailer. Or Otis’s shiny palatial blue trailer. But a green one! I stopped in protest. But a quick smack of the lead rope on my bum by Young Mum and I reconsidered my stance.

After a couple of minutes a very attractive lady came into the trailer. Ooh I did like her wide, white blaze! I’m not sure if she’s interested in me, because she squealed when I tried my chat up line. I kept trying the whole journey though, and I think she mellowed a bit.

We unloaded in an empty field. Where was the show? Young Mum mounted and we walked across a field to a huge open space of cross country jumps! Wow!

While I warming up I had a good look round – some of those jumps looks scary! Young Mum took it easy with me first of all – some logs and then we did the revolver jump, shiny barrels, sushi jump, skinny, tabletop, pencil, corner, army tank … then she made me jump a ditch! Not just a ditch in the woods, but a proper dug out ditch! I was a bit frightened, but after watching my lady friend let her rider go over her head I decided I’d better not do the same to Young Mum and jumped it! Then I did it again, and again. It wasn’t that scary anyway, I don’t know what my lady friend was thinking!

We did loads of jumps – steps up and down, coffins, boats, and then – a spider! 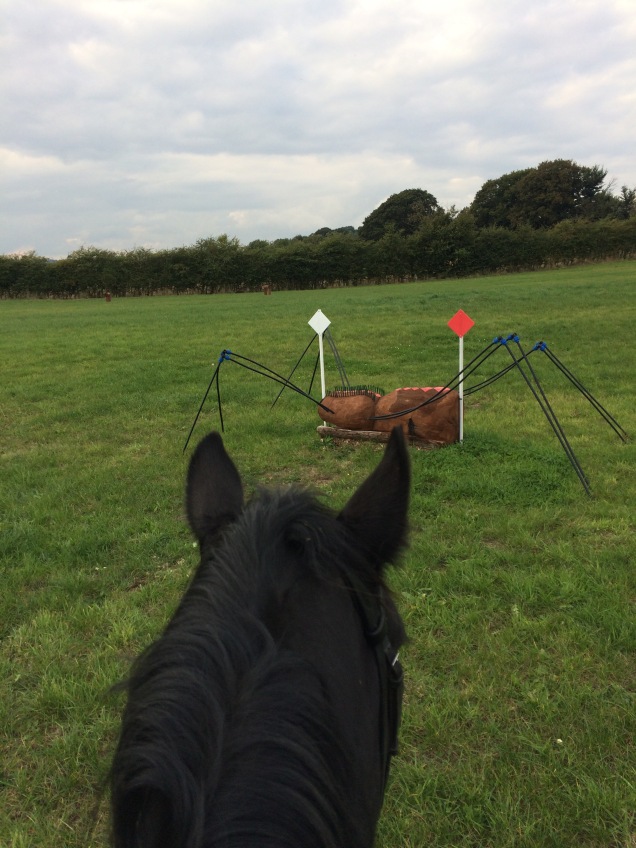 It was pretty scary, with all those legs and a tiny space to squeeze my belly through, but I was brave. I did it first time! Below is a video of me showing my skills, excuse the dirty tack at the beginning, apparently phones don’t work very well with gloves.

After the last couple of busy days I was glad to have a field day today, and much to Young Mum’s relief I’ve started waiting for dinner by the gate;  I did try making her bring the bucket all the way to me, but she refused!

It was an early start for Young Mum – she had a wedding to goto so   it was a long morning of making herself look presentable. She still lunged me though. First time this week! I’m getting better at it though, and could feel my trapezius muscle aching by the end. She said I’d put on a bit of weight though, which I’m not sure how to take …

The Chauffeur fed me in the afternoon, which was nice to see him.