I am currently bouncing off the walls, like a child on Christmas Eve. The cats are giving me funny looks as they sleep through the fireworks, and even non-horsey husband has ordered celebratory pizza.

Let me tell you why.

When Otis was signed off sick and Mum asked me to take Matt on boot camp, I asked if I could do the riding club dressage area qualifiers with him. I needed a focus, and it should be an achievable goal – to ride a fair test.

Her response was, “when are the championships? I want him back at Christmas.”

Matt’s jabs were out, so before he arrived he had his initial vaccination and then on 11th October he had the second one, which meant that all hoops were jumped through. I did wonder if I was going to too much trouble…

5 weeks after his arrival (i.e. Yesterday) we went to a hunter trial and did a pairs class with a friend. A textbook round, but a bit slow. However, we had lots of fun. Then today was the day of the dressage qualifier.

Matt is stabled at night because of the nearby fireworks and he isn’t impressed. It’s not cold or wet enough for him to enjoy being in, so he was very tetchy this morning – throwing his weight around, fidgeting, refusing to groom a disappointed Otis, pooping for England.

He practically trotted onto the trailer and before he could stamp his feet too many times we drove off. He travelled fine, but was keen to come off the trailer at the other end. So while Mum (who had come over especially for the occasion) held him next to his haynet – he only nibbled but when he did at least I knew he was relaxing slightly – I got ready in double quick time, whilst realising that we had left his prolite pad at home.

He was good in the warm up, focused and non spooky so we kept it light. My novice test (27) was first up.

Matt tensed up as we entered the large arena, gawping at the judge’s box, white boards and mirrors. But he relaxed as we started the test. I came away feeling that he had performed well overall. A couple of blips which I think were due to being slightly awestruck – wrong canter strike off, and inattentive halt as a person popped into view. But we scored 66%. Which is good when I felt it was definitely not our best.

After a hot chocolate and nibble at the haynet (he had the haynet, I had the hot chocolate) we had a quick warm up for Prelim 2. I didn’t want to overdo it so spent ten minutes wandering round chatting to another club member.

The Prelim test was in the smaller indoor school, with a netted side, where lots of people and horses pass, and a half open side where the riding school horses are tied (none there today thankfully) and some running water in the corner. We were a bit looky at the judge’s hut, and water, and kicked the white board to scare ourselves, but thankfully the judge was being offered refreshments when I entered so I had a couple of extra minutes to relax Matt.

Overall I felt this test was better. He was still aware of his surroundings, but he felt very rhythmical and forwards. We had a blip towards the end where we went from canter to trot too early because a horse popped into view, and our final centre line wasn’t as good as it could be.

We headed straight home after the test so Matt could have some valuable field time and then I got a message from another club member.

I nearly fell over. Genuinely gobsmacked. But it hadn’tbeen our  best!

I sat on the edge of my seat, not doing a very good job of reading my coaching book, for another couple of hours, until the final results were announced.

We had won our class, and qualified for the National Champs!! We had 78.28%, second place had 74% and third place had 68%, so we were comfortably in the lead. I popped over to the venue to collect my score sheet this evening and had a read of the marks. 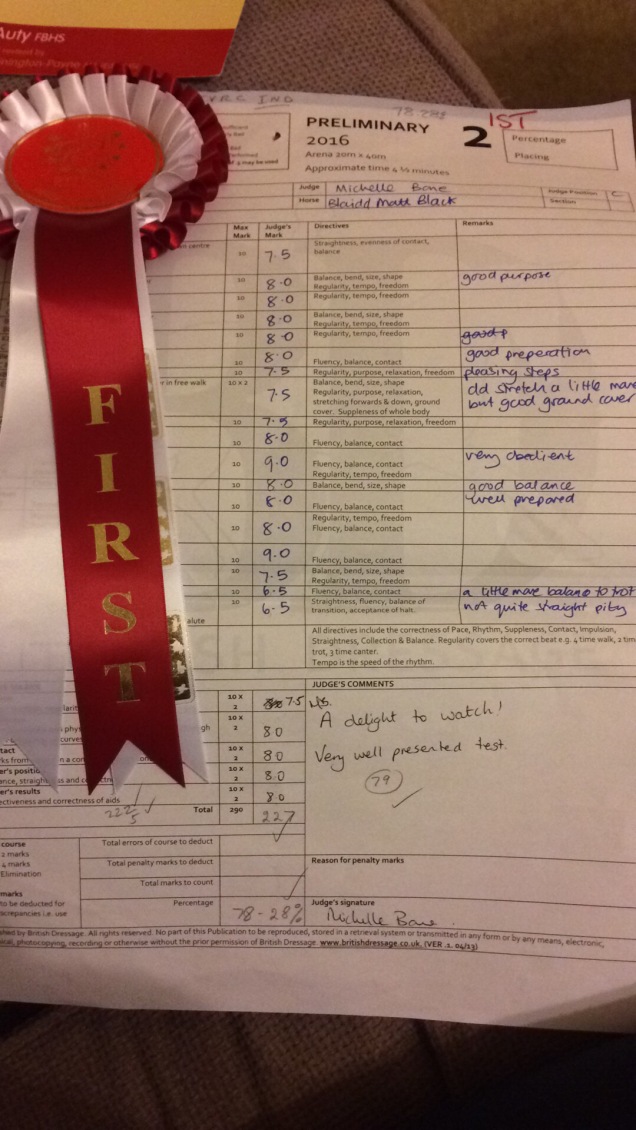 You can zoom in, but I’ll tell you anyway – Matt scored two 9.0s for his canter transitions! And the majority of his other marks were 8.0s! The final comment was “a delight to watch! Very well presented test.” Which is so nice to read. I know where to improve anyway – put blinkers on so he can’t stare at others, and practice my centre lines!

So yeah, Matt the super pony has qualified for the National  Champs with an awesome score! I’m so proud of him! Now I just need to negotiate terms with Mum …