The Chauffeur was on time this morning. I think Young Mum has finally drilled it into him that it is of imperative importance that I am turned out first. Otherwise I will have a tantrum! I behaved myself and was pleased that he spent more time on my stable than Otis’s. And no, it’s not because I’m a mucky pup, it’s because Young Mum neglected me yesterday and didn’t take all of the wet patch out when she gave me new wood pellets… her excuse was that she ran out of wheelbarrow space!

Anyway, I was on my best behaviour for The Chauffeur on our way to the field.

Again, we tolerated The Chauffeur on duty today. I must say that I hope he’s asked Santa for a spirit level for Christmas. If I’m honest, I quite liked having the weekend off, I got to catch up on gossip and have a nice roll to give my eyes a face pack since that’s the only part of me exposed.

Young Mum was back, and it was a bit chilly for my workout at dawn. It’s not long until Important Dressage Competition 2, so Young Mum needs to learn the directions. Apparently sat nav doesn’t work in a dressage test. I got to escort Otis along the road again. We get to walk further now, so I feel like it’s worth my time.

I blame Otis for this afternoon. We’re both in the dog house. Young Mum didn’t even put an extra rug on me for the night, even though it was supposed to be arctic conditions! It all started when Young Mum was catching me. She’d already got Otis and left him grazing outside his field. He thought it would be a good idea to trot downhill past my field. So we had to go and fetch him. Which I found exciting because I’d never been that far along the track before.

We both gave a couple of snorts as she led us back up. Pretending really. It was fun seeing our breath in front of us.

Then suddenly a bike whizzed up behind us on the road. We could see it through the holey hedge, and both jumped. Then Otis piaffed sideways – apparently there’s a technical term for prancing now. And I just joined in.

As we reached the corner, suddenly the bike appeared mid air! It’s owner was trying to throw it over the gate so she could take the short cut to the stables. Well that was it! We both snorted and reversed along the track to the stables. What a funny thing to do with a bike! I decided I’d had enough, and snatched the lead rope from Young Mum and legged it, Otis in hot pursuit! Halfway towards the stables, Otisdecided the grass was more tempting, and stupidly, he let Young Mum grab him. I however, am not stupid and squealed and cantered off again as she lunged for my rope. Otis rejoined me and we cantered away from the stables down the other track of fields. This was exciting because I’d never been here. So obviously we had to go all the way to the end.

Disgraced, Young Mum didn’t groom us or walk Otis, or anything when we got back to the stables. Lucky we even got dinner I suppose as she was so late.

Tuesday’s seem to be the new lesson day. I suppose I can’t complain after having the weekend off. Young Mum turned us both out really early, but she came back just after lunch, having bought lots of feed for us. If I’m honest, I was starting to get a bit worried when The Chauffeur told me on Sunday that there weren’t any bags left, just the scraps in the bin. I can’t be expected to be in peak condition if I’m not fed my usual rations of gourmet Alfalfa.

Young Mum caught up on poo picking today, which I commend her for because it was bitterly cold and The Chauffeur had neglected this part of his duties. Plus she had to push that heavy wheelbarrow up the hill without sliding back down!

We both had a good groom and then Young Mum and I escorted Otis out to warm up for my lesson. I was very good; I just have to remember to stand to attention on the centre line, not look at everyone else. But it’s so exciting, I want to know what they’re doing in their field! Then we did lots of canter figures of eight so that my change of bend in trot is perfect. It’s getting there…

Young Mum decided I could have the morning off today. I should think so! Minus seven it was! She was busy in the evening teaching too so it was minimal services.

This frosty morning Young Mum dragged me out for a lunge. When I started off I had a stretch to sniff the ground. It smelt fresh and crispy so I thought I’d roll in it. Make myself all frosty! But Young Mum wouldn’t let me.

After my awesome cantering on the lunge she took my Pessoa off. I stood there, watching her trying to get me to roll. Scraping the ground with her foot, pushing me away. But I’m not a dog, I don’t do tricks so I continued to look at her disdainfully. Eventually she gave up and let me put my rugs back on to warm up.

​This morning I had a pedicure and I’m afraid I had to tell my nice farrier to buck his ideas  up a bit. He arrived at 7, and I ate breakfast while he filed and shaped my hooves. Then of course it was time for me to go out. But he wasn’t finished. I had expressed my concern about the timing when Young Mum had booked me in. She knows I have to be turned out first! After being told off for fidgeting and dancing around, Young Mum held me while the final nails were hammered in. I expressed my displeasure by dragging Young Mum and Otis to the field.
I was still grumpy this afternoon, so when a car passed us through  the hedge I told Otis to jump. We squished Young Mum between us and cantered off. No stopping for snacks this time, we held our tails high and hot hoofed it down the other track! I broke the headcollar as I went.

I half thought about not letting her catch me at the bottom, but the look on her face told me otherwise.

After telling me that I had my “Welsh Brain” on she rode me. With the excuse of this new brain I proceeded to execute some fabulous spooks and gallops for very little reason. So I had to do ten minutes of medium trot! 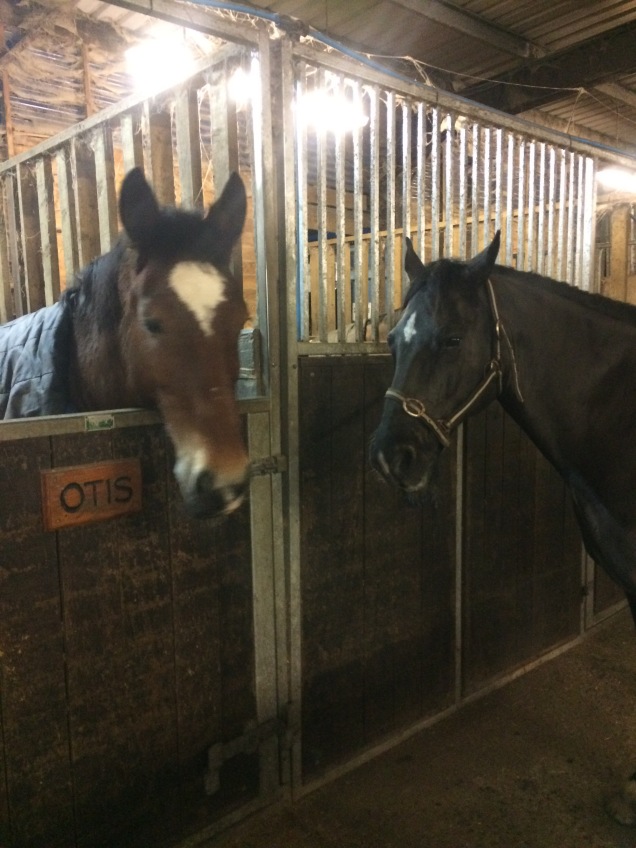