Anyone else spend hours agonising over whether they should be feeding hay or haylage? Halfway through the winter there’s usually a panic as our horses develop coughs, behaviour changes, or put on weight.

To help you decide, I’ve put together some pros and cons.

Obviously some of these comments are pros and cons, depending on your horse’s individual needs, but hopefully it has helped you in deciding whether you should feed your horse hay, haylage, or even a combination of the two! 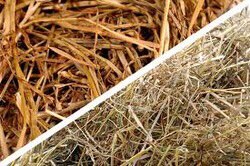 6 thoughts on “Hay vs Haylage”