I thought everyone would appreciate a regular update as I bring Otis into some sort of work, and any research, management techniques, trials and errors that I meet.

Last weekend I took Otis out for a couple of 30 minute walks, with a trot on the good tracks. Nothing had changed in his diet, routine etc, but I needed to get a baseline of how he feels to compare to in coming weeks.

Then I did a lot of research into joint and mobility supplements, spoke to my physio/vet friend and another physio, who is a bit of a witch doctor, and both agreed with my research that natural inflammatories were the best place to start as they will help stop the tendons being aggravated. I also wanted something to help regenerate tissue so any damage to tendons was repaired quickly. No one supplement offered this combination, so I have opted for a bespoke supplement which can be adjusted according to Otis’s response to it. This has four ingredients; botswellia serata and turmeric, which are both natural anti inflammatories; GLHCL which is glucosamine HCL and regenerates connective tissue; MSM which improves circulation. I guess the MSM means toxins are removed from the area quicker. These ingredients all seem logical and reasonable, providing Otis responds well to them so I will just have to try. The supplement arrived on Thursday so we are still on the loading dose and I’ll have to see if I feel there is an improvement over the next couple of weeks.

Someone told me to ensure Otis is receiving sufficient Vitamin E as this helps repair and recovery. I looked at feedstuffs that are high in vitamin E, and linseed is very good. Otis is already fed cooked linseed powder, so this morning I fired off an email to that company to get confirmation of levels of vitamin E. If I have to change linseed suppliers or the form of linseed, in order to get enough vitamin E into his diet then I’ll consider that once they have replied. I’d rather have one supplement that provides two elements than two different pots.

If this supplement doesn’t work then I will give him a week’s break to get it out of his system before trying a different set of ingredients.

Otis was shod last week and is now on a five week cycle, so that will just require me to keep an eye on how much his toes are growing and if I feel he is still getting enough support from the shoes for the whole duration. He’s not shod on his hind feet at the moment, but I’ve a feeling I might need to put them back on next shoeing. But again, I’ll just go with the flow.

I’ve also done lots of research into photonic red light therapy and this week another friend who uses it to manage her horse’s foot condition is going to come and see Otis and show me her lights, how they work and if Otis responds to them. I won’t go into too much detail here as it’s an interesting potential blog subject, but photonics has been developed by NASA and uses red light to “reset” cells so they are vibrating at a healthy level and kickstarts them into correct functioning. Google it if you want, there’s plenty to read out there!

If Otis doesn’t respond to the photonics then someone suggested magnetic therapy, which I haven’t researched much about except that I do know my cynical Dad found that it reduced his symptoms of carpel tunnel syndrome. Depending on the effectiveness of the photonics I will look at other therapies.

I want to try things one at a time to find out what Otis responds to. Additionally, the witch doctor physio told me about a client she had who had thrown every therapy and supplement under the sun on her horse’s splint, basically feeding it, until it grew humongous! Obviously there is a balance to be had here between providing nutrients to aid healing and providing nutrients to grow. She did think that my idea of supporting his injury through his foot with additional support of a therapy was the way forwards.

Chatting to my physio/vet friend, we agreed with each other that whilst with tendon injuries you avoid deep going in rehab and bone injuries you avoid hard ground, Otis has an element of the two. We’re going to avoid extremes of ground, but use a mixture of softer to firm going.

This week has been half term so I’ve long reined and ridden Otis three times during the week, and both weekend days. I felt that he was better yesterday afternoon, so he’s spending his first night out tonight. I prefer riding in the mornings and I’d rather he’d had a leg stretch before I got on. Then I shouldn’t have the effect of standing in complicating my assessments of his way of going.

I still worry that Otis won’t tell me when it hurts. He’s such a patient, quiet horse who always tries for you, I’m concerned that he will “grin and bear it”. Today though, I felt quite positive as he jogged a little on our hack and was very keen, looking around at everything. He was shattered by the end as we’d walked up a steep hill, so I hope the worried look in his eye was just muscle fatigue rather than foot pain. 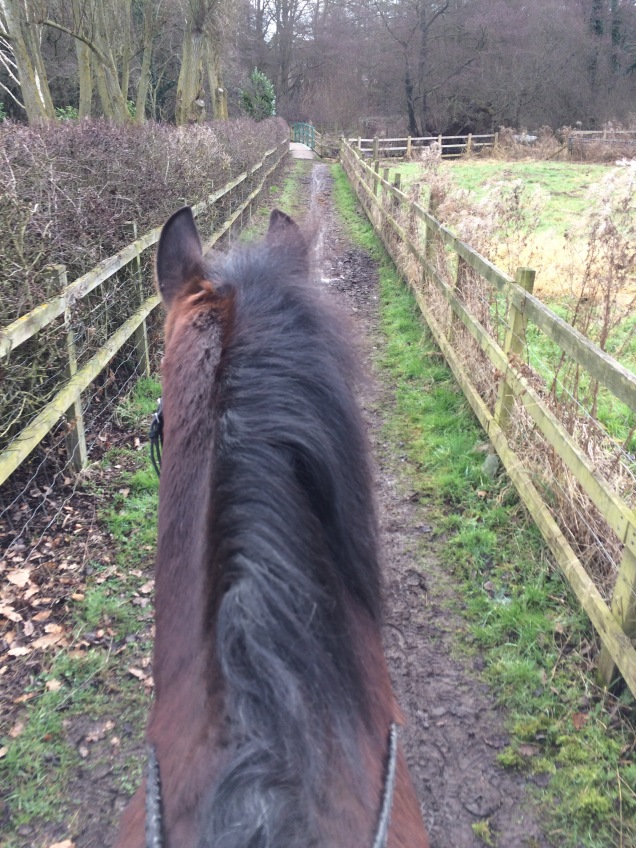 I’m feeling more positive than last week when I heard his diagnosis, but there’s a long, rocky road ahead of us as I find the right balance to help him.