Twenty years ago draw reins, market harboroughs, and other gadgets were all the rage, causing uneducated riders to tie their horse’s heads to their chests. Now word is slowly spreading that horses need to be worked from the hindquarters forwards, and need freedom in the head and neck, with the nose on the vertical. And a new type of gadget has evolved.

There are hundreds of lunging gadgets on the market today – the Pessoa, the Whittaker training aid, the equi-ami, to name a few. All of them have a strap that goes from the roller around the hindquarters, encouraging them to step under and push themselves forwards. Then there is some gizmo that runs from the roller, to the bit and then back to the roller in various positions according to the horse’s level of training.

Now I’ve used both the Pessoa and the equi-ami with success on horses, but I do worry that in the wrong hands horses are still being tied down, but instead of head to chest it is now chest to bum. 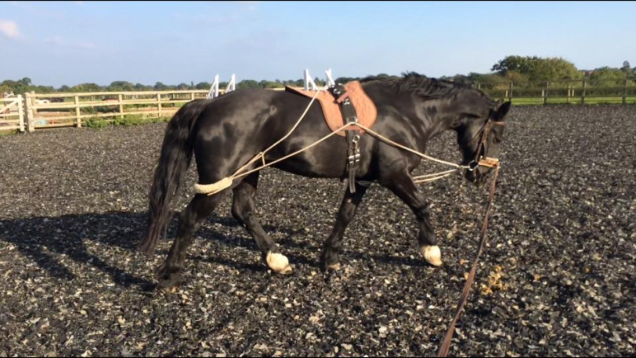 Let’s look at how these gadgets work, because they are all very similar. The horse is encouraged to push from behind, step under with the hind leg, lift their abdominal muscles, lift their back and wither,  and the under neck muscles relaxed. It’s that upside down bowl, or a strung bow that we all strive for.

However, problems can occur if these gadgets are too tight for the horse. The horse feels the pressure from the back strap, but if their tummy and topline aren’t developed enough they can’t engage sufficiently and as they lift their head to find their balance the gadget puts pressure on their mouth. Often causing horses to lift their head even higher, or stop travelling forwards. Some will stop and rear.

In this situation, the best thing is to back off. Loosen all straps so the horse has more leeway to find their balance and they are encouraged to work correctly, rather than being forced to. When the pressure is reduced the horse will be happier and more relaxed, so is more likely to learn from the gadget. Once the horse has muscled up and developed the correct muscles it may be that the gadget needs adjusting because the horse is moving away from the long and low frame and towards a more collected frame, however it is so detrimental to their bodies to try and run before they can walk and expect them to move in a collected outline.

This happened to me this week. I lunged a horse, who has used the equi-ami before, and he started off nicely, stretching his topline and swinging over his back. But then I don’t know what happened, maybe he had a mis-step, but he lifted his head to balance himself. The equi-aid put pressure on his mouth and he felt trapped. He stopped, lifted his head and all in all looked uncomfortable. So I loosened the gadget until it was too loose, and then took him back a step and just walked until he’d relaxed. Then he trotted for the rest of the session happily, working really well. I don’t think I had the gadget too tight, but I think his tolerance of pressure is low. Perhaps to do with something in his history? I cantered him without the gadget, even though last time he’d accepted the gadget in trot and canter, there’s no point this time because he’s obviously not quite as comfortable with it.

I dare say a lesser knowledgable or experienced rider or owner would have kept on lunging, creating a tense horse who accommodated the gadget by holding tension and not coming through from behind. Said horse could become shut down, learned helplessness I think it’s called, and allow themselves to be tied in from nose to tail. 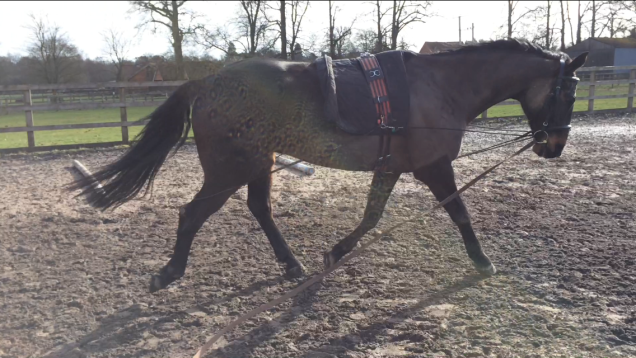 When I use the Pessoa on any horse I am always on the lookout for them becoming overbent, and cheating the gadget. If they do then I’ll change the setting, lengthen the ropes, or take it away for a bit.

I like using the gadgets when needed to help guide the horse into the correct frame, but as soon as they start getting over bent or going behind the vertical I change it. But it’s important to remember that gadgets are for pointing the horse in the right direct, not fixing them in place, and when instructors or trainers recommend their use they should make sure the owner understands how these gadgets work otherwise we could recreate the problem we had two decades of horses being over bent and working incorrectly.

A good test of whether a horse knows and understands how to carry themselves is to lunge them “naked” and see if they find their own balance and self carriage. 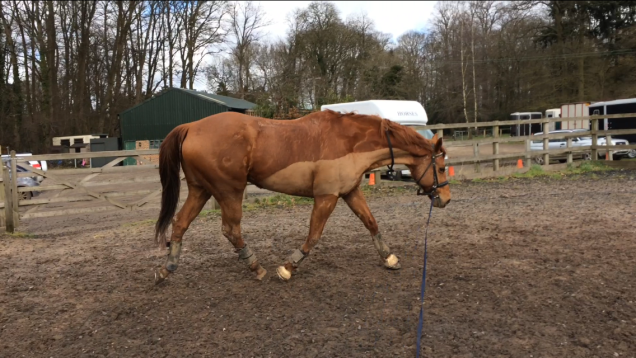 9 thoughts on “Gadgets and Gizmos”