The ideal bascule, which makes jumping effortless and lengthens their athletic life expectancy, as well as making them successful in the competition ring, is when a horse folds his forelegs neatly underneath him, rounds his back, lengthens and lowers the neck, and then follows through with tidy hindlegs.

Various faults occur, either by poor training, poor technique, lack of confidence, or poor conformation. One interesting jumping fault I’ve recently experienced, and haven’t really come across it before, is the slither technique.

Have you seen it? It’s when the forelegs get left behind and the horse literally jumps with his front legs under his belly.

Initially, I wasn’t sure how best to work on overcoming this fault, but as ever reverted to flatwork.

Showjumping is dressage with speed bumps.

The horse in question is rather large, with long legs. Like a super model! So the flatwork focused on engaging his hindquarters, getting him to lighten his forehand and bring his engine underneath him. Smaller circles and shoulder in have all improved his balance, and the canter has improved dramatically. He can now shorten and lengthen the canter strides without losing his balance and his hindquarters are doing more work than his shoulders.

Horses tend to slither over jumps when related distances are too short, which given this horse’s size puts him at a disadvantage. At every competition he will find distances a bit short. Which is why it’s so important that his canter is adjustable. It does mean for me that I have to be generous with my grid distances with him so that he learns, and develops the right muscles, to bascule correctly. Then once he is stronger and more adjustable in the canter we can start to teach him to work with the slightly shorter distances, that he would find in a competition environment.

Once a horse is starting to get the hang of basculing correctly the gridwork becomes invaluable. Having a quick succession of jumps, one or two strides apart improves the horse’s gymnastic ability because they have to extend and flex their joints in quick succession.

Over the last few months this horse has really improved and the slithering only happens when he gets too deep into fences. I’m enjoying seeing him going out competing with his owner now, and having more success.

The other factor that can cause horses to slither over jumps is when they are a bit slow to pick up their forehand and to lift the shoulder over jumps. Which caused me to use an A-frame with this particular horse the other week. A placing pole meant he didn’t get too close, and the A-frame really got him lifting his forelegs and tucking them up neatly. His owner could feel the difference in the bascule from the saddle – his back rounded underneath her over the fence.

Our next move is to try a line of bounces because this will make him pick up his feet quickly, and improve the muscle memory, which will mean that if he does get a bit deep into a jump he will be able to get himself out of trouble. Previously when I’ve done raised pole and bounce work with him he’s found it really difficult to organise his legs and keep his balance, which invariably means I have to get on and off a lot to adjust poles!

Just by using a combination of different exercises, you can make massive improvements to a horse’s technique and build the correct muscles. Recently, because this particular horse was jumping so well on a lesson, we did a bit of a Chase-Me-Charlie. I wanted to build the horse’s confidence a bit and see the extent of his scope, but I knew a single upright would be very difficult for him as he would have to pick up his forelegs very quickly; he’s much better in his technique but our high jumps needed to complement previous work, and not let him revert to slithering. So I build an oxer. The front rail wasn’t very high, perhaps 70cm, and there was a clear ground line. The back rail of the oxer, which wasn’t that wide, started at 90cm. As he cleared it comfortably I notched it up, and up, to an impressive 120cm. He cleared it easily, whilst still jumping correctly! I was so pleased!

Now we need to increase the height of the general exercises to build his muscles and confidence, whilst still using his body correctly and efficiently. Then they will definitely notice a difference at competitions! 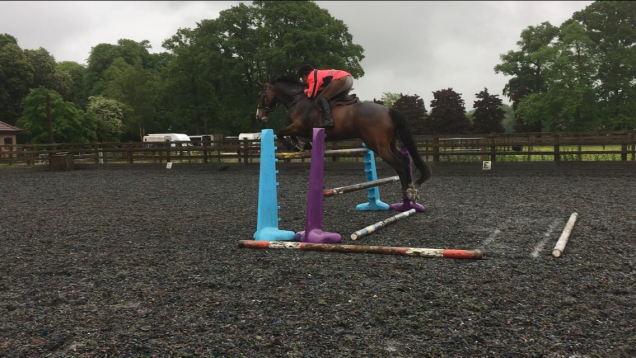