I had a challenge and a half this week, which definitely got me rummaging around my tool box for solutions.

I have a young rider who suffers from first-jump-itis. She flies through grids, and any related distances but as soon as I put a course together she falls apart.

In her first lesson this week, a bit later in the evening because of the heat, I built a course as she warmed up on the flat. Then I warmed her up over a cross pole then upright, and then started putting a couple of the lines of my course together. The jumps were well within their comfort zone and she was riding well. We had the odd dodgy jump when she was a bit restrictive with her hands (something we’ve been working on) but her lines between fences was superb.

Once she’d jumped nearly all of them, bar a couple of island fences, I explained the course. And it went wrong. She had a stop at the first one and promptly slid out the side door. Remounted, she rode it again successfully and the rest of the course got better – it flowed more and she looked more comfortable as she went through.

I upped some of the jumps; still within her comfort zone – especially the first one and she did it again. The first jump was still an issue so once they’d ridden the course with a sticky first jump I suggested we did the course one last time, to crack the first-jump-itis. After all, she’d jumped it a few times now and I think repetition was needed to stop her overthinking it. They had a good breather and then off they went.

And it all went wrong. The pony stopped, she fell off, then she over rode and got in front of the movement, and then her pony started anticipating and stopping even when she gave him a fair approach. Then she froze and pulled with her hands into the fence. Even lowering the jump didn’t help.

Then of course we’re in this vicious cycle where everyone gets hot and bothered. So I told them to have a walk break and moved onto another fence, and made that a little cross. They stumbled over it and I could see my rider was just in a panic.

I’ve said before, that teenagers can be tricky if there’s an external problem or if they’re a bit hormonal or whatever, it can be hard to solve a problem. Thankfully I know this rider very well, so jokingly checked there were no boy problems, or anything else she wanted to tell me. There wasn’t, so I told her to serenade me the next time she jumped. She laughed despite herself, and moaned that she wasn’t very good at singing. But just her laughter caused her to relax a bit and break the tension.

She went again, and on the approach to the cross pole started singing Twinkle Twinkle Little Star. They instantly improved, relaxing and she had the handbrake off so her pony sorted the jump out himself. I made her repeat it a couple more times, singing loudly.

Then I made it an upright and continued with the singing approach, finding it made her breathing more even and meant my rider sat more like a passenger, which she needed to do so that she didn’t interfere with her pony’s jumping.

That went smoothly so as she landed  I told her to maintain the canter and approach the original jump. Unfortunately getting them up and running didn’t mean that they negotiated the problem jump. Usually breaking the cycle and establishing a flow helps overcome psychological refusals. But I noticed my rider stopped singing on the approach, and freezing her body.

I took the jump right down and got them singing and trotting, then cantering, over it until they’d done the original fence. The important part was that she continued singing and stayed relaxed. As soon as they’d succeeded we finished the lesson … to be continued tomorrow.

I mulled over the conundrum overnight, and the following day realised that it’s been very hot this week and the adults I teach bring their own water to lessons. Parents bring water for their kids in their lessons. I don’t take water with me unless I have multiple lessons because I just end up leaving it in arenas. But this young rider had come down to her lesson alone – Dad was poo picking (how well trained!) – so her performance was probably affected in the last third of the lesson because of thirst or heat. I had a gap in my diary just before her lesson and was feeling quite thirsty myself so headed to Costa and bought two iced fruit coolers, assuming my rider wouldn’t have a drink.

She seemed very pleased with the drink, and I think it definitely helped her having frequent slurps through the lesson. I changed the course slightly to make a three jump grid, which I kept as little crosses and got her jumping through in a relaxed and positive way to warm up. I also got her to jump the grid with one arm out to the side, just to highlight how tense her arms get on the approach, particularly when she’s worried. This also built her pony’s confidence back up.

With the grid going well I then used it as the first element on a course. This was to help her establish the rhythm and get into the zone before continuing on to the courses. I still made her sing loudly, and I was pleased to hear her doing it on her own accord. With her breathing and being more relaxed, and me reminding her to release her hands on the approach, the lines flowed a bit smoother.

We had a couple of minor blips but overall a much more positive session. They jumped the grid then onto the course a couple of times successfully and then I called it a day. I felt it was more important to finish on a good note than to change the course in any way and ask any more questions. After all, there were a few little things for them both to go away and reflect on.

Lessons to learn are for me to double check everyone brings water or refreshments to lessons in hot weather. To use grids the next couple of lessons to establish my rider’s rhythm and get her in the zone. To make her sing to every jump because each time she stopped singing she had a more frantic approach and not such a good take off or bascule. I’m also tempted to do some lunging without reins, and more grids without reins so that I stop her using the handbrake. Then hopefully we can break the cycle and they get back on top of their game. 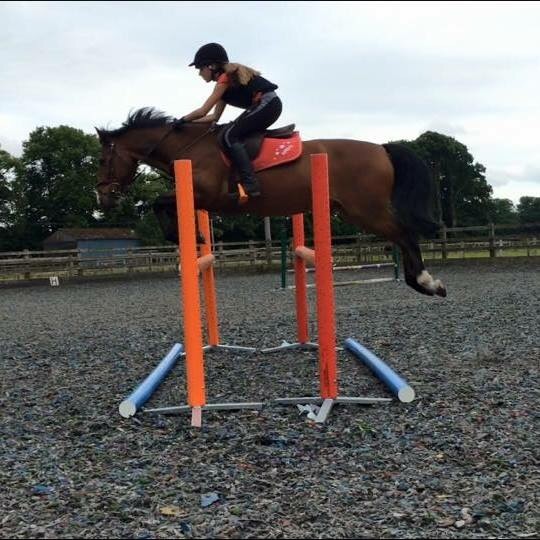