I did this exercise with a client yesterday and her pony. They love jumping, and we’re pushing towards 90cm courses and beyond. However in order to be successful over bigger fences the canter needs to be more uphill. The mare knows her job, bit by encouraging her to “sit” on her hindquarters more will strengthen them and enable her to make a steeper bascule, which will make jumping bigger fences easier. I’d also like the mare not to take such long, flat strides to fences as that’s when she over jumps or isn’t quick enough to fold her legs up and knocks it down.

As ever, it can be difficult to teach someone what a bouncier, more collected canter feels like when they haven’t experienced one before. Which is where poles come in very useful.

On a twenty metre circle I laid out four poles at the 3,6,9,12 positions. We worked on each rein, cantering over the centre of the poles. The aims were to have a round circle, with the same number of strides between each pole, and to not leap the poles. It’s harder than you think as the rider has to plan their line in advance, use the outside aids and not rely on the inside rein, and have a good feel for the rhythm. The horse will find it tricky because the inside hind leg has to be more active over the poles and as it comes under the body they have to maintain their balance and be supple enough that they don’t drift out through their outside shoulder. It took a few circuits on each rein, but the canter started to get rounder and more elevated. This mare is quite laterally stiff, so I wasn’t expecting full circles in this balanced, improved canter, but rather to see both her and her rider “getting it” and maintaining it for a couple of poles before regrouping. That way, my rider knows what it is she is aiming for in the future, and we build the pony’s strength steadily.

Then I raised the inside end of each pole slightly. This exaggerates the canter stride so improves the mare’s flexibility and suppleness, as well as pushing the boundaries on her balance.

This rider has a habit of using too much inside rein, so this exercise highlighted the problems of overusing it and made her focus on her outside aids.

From the two poles on the three quarter lines, I walked a dog leg of five short canter strides to build and upright. This meant we had a left dog leg and a right dog leg. The uprights were 90-100cm high.

The exercise we rode was the same on both reins. Ride the circle of poles until the canter felt bouncy and then leave the circle on the three quarter line pole and ride the dog leg, aiming to maintain that canter, to the upright.

The mare can lock on, otherwise I’d have built the related distance in a straight line, but the dog leg meant she had to listen to her rider. On the right rein they had a very nice five canter strides and jumped the upright with a steeper bascule. The take off point was slightly closer and the mare made a cleaner shape. My rider could feel the difference in the way they jumped, and hopefully can understand how having the canter in a more uphill frame will help them get clear rounds. The left rein is the mare’s slightly weaker lead, and it took them a couple of attempts to ride a smooth dog leg turn, but again their technique was much better. 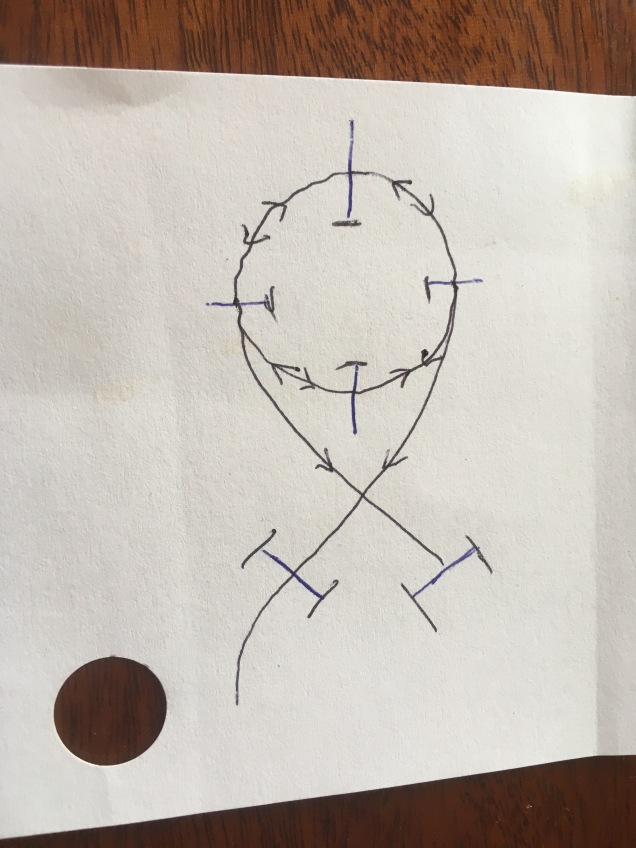 I found this exercise really beneficial for engaging the inside hindleg and the back muscles, and now my rider knows the canter she is aiming for we can try and reproduce that on the flat and round courses so the last fence isn’t the annoying one they have down! Below you can see how active the inside hindleg is in this canter after using the circle of poles.