I thought that today, after my quick visit to Otis, that you may like to know how he's getting on.

He moved into his new field (definitely bigger than a paddock) nearly a month ago and after a settling in period, seems to be very content.

When he first moved there were the four other boys who made up the core of the herd. Plus an unsettled youngster who had been evicted from the stables to do some growing up before going back into work. I fully anticipated some running around in the first twenty four hours, and would've put money on Otis losing a shoe. Which he duly did. The youngster attached himself to Otis, who I think got fed up of having a stalker after a couple of days.

Anyway, a week later, a new shoe on, the youngster gone, and I was getting used to the idea that I didn't have to get up and go see him every morning. Then we had another upset: the boys were joined by another horse. This one was quite dominant, and together with the other dominant gelding, changed the dynamics of the herd.

After a couple of days, I went to see Otis and came back quite distraught. His fly rug had been ripped in their antics and where he'd been naked he was covered in fly bites. He'd lost his fly mask and had a cut in his ear, which looked very sore and I was worried it would get infected, as one has before. Then he'd lost another shoe and had a cut on his cannon bone. On his hind pasterns there were a series of little scans. He'd been in the wars.

At that point, I was seriously worried that I'd made the wrong decision. I'd expected some settling in antics, but had thought that a stable herd of veteran boys wouldn't involve much careering around.

I had his shoe put back on, treated the fly bites and put on his spare fly rug. Thankfully his rug was repairable, so that went off to the menders. I dug out another fly mask with ears, but he wouldn't let me treat his ear cut. So I had to hope that covering it up would be enough to help it heal. Thankfully, that seems to have been enough. The cut on his cannon bone was clean so I just left it, and hoped that it would be the only one.

I did some thinking about the scabs on his hind. Someone said it could be mites. Which obviously worried me. But, whilst walking around the field shoe-hunting I noticed there were patches of small thistles. They were pastern height, but very prickly because the field was topped earlier this year. As Otis has white socks and isn't used to thistles, I wondered if that was causing the scabs. So I treated the scabs with purple spray the next time I visited him. These seem to be getting better too, which makes me hopeful that they aren't mites. 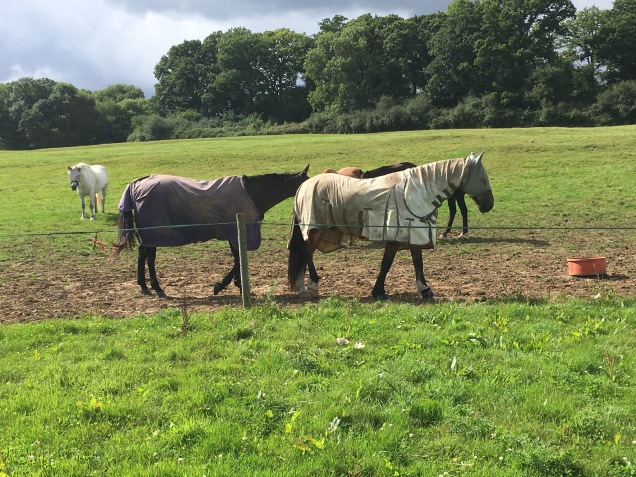 The last ten days or so, I feel like I've turned a corner. The herd is back to it's core of five, and they all seem very peaceful. There's been no more lost shoes or injuries, and his rug and fly mask are still intact. Otis always whinnies to see me, and happily comes over for his tablet disguised carrot. I pick his feet out, fly spray him, check him all over and have a hug. He seems to radiate contentedness and I feel so much happier knowing that he's happy, and so each time I see him I feel more at peace with my decision for him over the next few months. 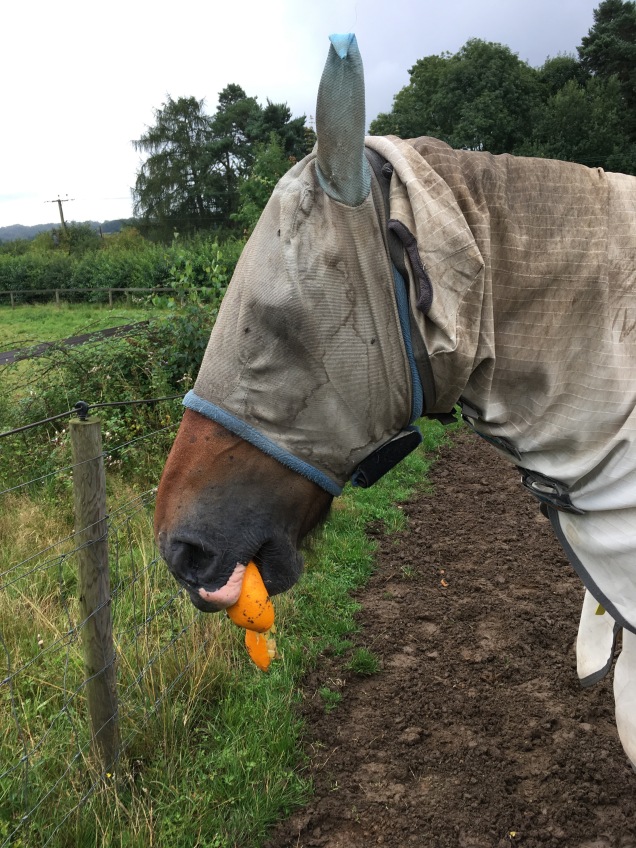 One thought on “Otis’s New Life”