I’ve done some work with several clients this week about riding the outside shoulder around turns.

To the untrained eye, a horse giving an exaggerated neck bend can seem to be more supple than a horse who is slightly straighter through the body but engaging his hindquarters, yet the latter is working more efficiently and correctly.

Often, I believe, this trait comes from riders over using their inside rein, and horses being asked to ride too small a circle or too tight a turn before they are physically strong and balanced enough, so in order to negotiate the turn they fall through the outside shoulder as they go round.

Firstly, let’s look at how to prevent a horse falling out on turns and circles. The aids are the outside leg pushing the barrel around, and the outside rein maintaining the contact and preventing the neck from flexing. For a horse who is inclined to fall out, this rein has to be prepared to support the shoulder as the horse tries to fall out, then tries to work out how he should be moving. Often, this is where it goes wrong because the rider is not convinced enough in their application of the aids or strong enough in their core, that when the horse gets heavy in the outside hand they lengthen the arm to relieve the pressure. Which means the horse continues to fall through the outside shoulder. The inside rein on the turn opens, to tell the horse where they should be going. Think of this rein as an indicator, not an instigator. It is only suggesting to the horse which direction they need to go, not causing the movement itself. The inside leg prevents the horse falling in and also acts as the accelerator, keeping the impulsion of the gait. The rider’s body turns in the direction of movement, being careful not to throw the outside hand forward. The inside seat bone is loaded fractionally, and the outside shoulder and hip go forward.

So that’s how you should ride a turn. Be honest, do you always abide by these aids, or do you sometimes panic and think you aren’t going to make the turn so grab the inside rein? Or do you forget about the outside of your body? It’s very easily done, particularly when a horse tries to fall through the outside shoulder due to habit/old injury/previous poor schooling/evasion.

What exercises can be done to teach the rider to bring the outside shoulder around on turns, or to teach the horse to engage their inside hind leg through turns?

Firstly, I’ll often ask a rider to think about what’s going on underneath and behind them on circles while they warm up, this builds an awareness of the parts of the horse which are out of sight. Then they will more easily feel any improvement.

I like to use squares too, whether it’s just riding E-B or creating a square around the letter X. I’ll ask my rider to imagine that their horse is a plank of wood for a moment, and round each corner they are going to keep them as straight as possible. This stops them using so much inside rein and gets them using the outside aids. Once they are managing this and aren’t likely to fall back into old habits, we start introducing a bit of bend and softening the square into a circle. However, I get them to focus on creating a bend in the body, not the neck first – that comes naturally – so my rider thinks about the feel underneath them and uses the leg and seat to get a slight curve along the horse’s spine. Finally, I tell them to just allow the neck to bend in the direction of movement, which usually means that the horse gives just enough bend and the rider hasn’t lost the outside shoulder.

So this gets a rider feeling the difference between a uniform bend through the body, and a horse falling out through the outside shoulder. Hopefully they then apply the same aids on all circles and turns.

Now let’s look at the horse. Some horses are naturally crooked, so seem to bend easily in one direction and not so much in the other. One mare I teach sits in quarters right. We’ve done a lot of work building her rider’s awareness for the slight bend, and worked on improving the mare’s suppleness. In the trot my rider is getting more effective at using her outside aids and their circles are much improved, but the crookedness shows up most in the canter. Especially on the right rein. Both horse and rider have slight counter flexion, which added to the quarters sitting right means that circles tend to be more of an impression of a motorbike. So we’ve worked on my rider correcting her position and degree of turn, and then we asked the mare to look slightly to the outside in the canter before moving on to squarish circles, keeping the outside bend. To do this my rider had to keep her outside rein and exaggerate her outside leg. However, the mare soon started to move around the school with her outside shoulder coming round. After doing this a few times my rider could really feel the improvement in the canter – it was more active and where the mare was straighter it looked like the hindlegs were propelling her along better. Returning to usual circles in canter, my rider managed to prevent the mare curling her neck and falling through the outside shoulder whilst having a bit of inside bend. Now she was riding from her inside leg into her outside rein, which means she has much more control over the horse’s positioning through turns.

I’ve done similar work with another client, who’s cob falls out on right turns. This is more important for her with her jumping because when the cob drifts out through his left shoulder he loses power, which means he chips in or is more likely to know the fence down. As soon as his rider rode a square turn, off her outside aids and with slight counter flexion, they maintained the quality of the canter to the fence and met it on a much better stride. Next week, I’m planning on doing some more work on this right turn before fences to really establish my rider’s aids, and her horse’s technique and balance through the corner.

Other exercises I like to use with a horse who is reluctant to bring their outside shoulder around on turns are; shoulder in, shoulder in on turns, haunches out on turns, turn on the forehand. Anything really that gets them listening to the outside rein, encourages them to bring the inside hindleg under and towards the centre of their body and helps improve their general straightness.

Horse and Country TV did a useful video about the importance of bringing the outside shoulder round on turns, and you can see from my screen shots below, the difference between the first one (riding off the inside rein) and the second one (riding from the outside aids). If you can, see if you can find the full length video masterclass. 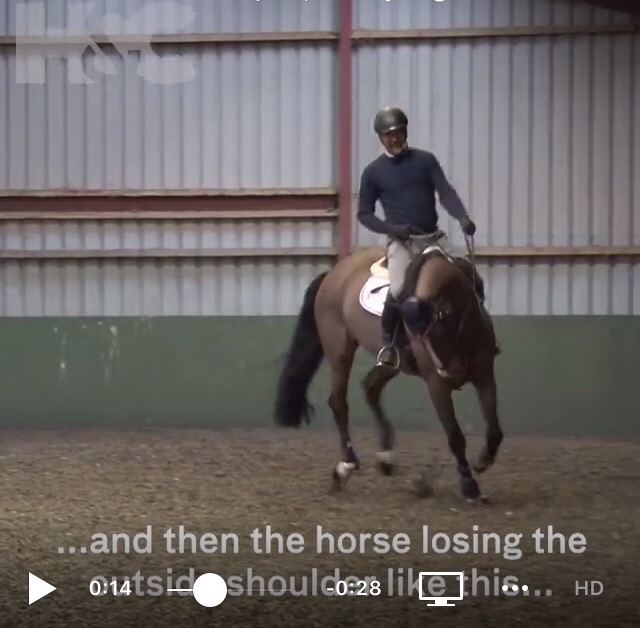