There’s been a lot of talk recently by vets about the dangers of impaction colic at this time of year.

Impaction colic is caused by a blockage in the gastrointestinal tract, usually caused by a build up of solid material (often food or partially formed faeces) which prevents normal passage through the gut.

The risk of impaction colic increases in winter when horses move from a diet of grass, which is 75% water, to hay, which can be up to 20% water, because there is a higher percentage of dry matter in their intestines to move.

Horses on box rest, with limited movement, or like last week when the horses stayed in due to the snow and ice, are more at risk of impaction colic because reduced movement reduces peristalsis so food matter travels more slowly through the gut and is more likely to get stuck.

Horses who are dehydrated, due to heavy exercise, a drier diet, insufficient fresh water, or cold weather making their water sources icy cold, are at risk of impaction colic because less water in their system means that there is less fluid to soften the food as it travels through the digestive tract so it is prone to building into a bigger bolus and getting stuck.

Horses, well ponies really, who binge eat are at risk of impaction colic because of the sheer volume of food entering their body in a short space of time. Also, unsoaked sugar beet that is eaten will expand in the digestive tract, so potentially forming a blockage.

There are numerous other causes of impaction colic – roundworm infestation (I saw a particularly gory video doing the rounds on Facebook first thing this morning), poor dentition, sandy soil, repeated sedation, eating straw – but the main reasons I spoke about are particularly important when considering your winter management of horses.

Ensuring that they have enough access to fresh water, which isn’t icy cold is paramount. It’s very easy to overlook water supplies when the ground is so muddy or there’s snow lying around, but horses won’t drink water that is too cold, which can then lead to it not being refreshed and going stale. On cold nights you can insulate water buckets in stables by surrounding them with straw which will help keep the chill away.

Making the transition from grass to hay slowly, and using soaked hay will help reduce the risk of impaction colic. Horses who are known to be fussy drinkers would benefit from dampened or soaked hay, or haylage throughout the winter. You can also increase their water intake by feeding soaked feeds – sugar beet, or the Allen and Page soaked range for example.

Whilst horses have evolved to be trickle eaters, when placed in the stable environment we give them fixed meal times. Which can lead to them scoffing down their haynets and then standing with an empty stomach for hours. Some owners give a bigger quantity so it takes longer for them to eat. Perhaps a better option is to work out a routine so that hay is given frequently throughout the day. For example, if your horse comes in at 4pm, could he have a small haynet then. When you arrive after work, say 6ish and ride, or pamper, he could have his hard feed and another smallish haynet then a friend who is there later than you could give your horse his night net, which is much bigger. Then in the morning, an early riser could give either breakfast or a small haynet which will keep your horse going until turn out. Then a small ration in the field will fuel him through the day. I can remember at college we’d bring the horses in and put them to bed with hard feeds and small haynets at 5pm, and then at 9pm they were given their night nets, which spread their food intake as much as possible. I’m waiting for someone to invent hay dispensers, which give horses a ration of forage at a set time in the middle of the night.

Alternative ways of slowing down eating is to double net, or use small holed haynets, or to soak the hay so that it requires more chewing to break it up to form a bolus to swallow.

I think one thing that people often overlook in winter, because of the reduced light, reduced turnout, and reduced saddle time, is exercise. A horse who is stabled and only turned out for a few hours a day is likely to have reduced gut activity because peristalsis is increased with movement which makes them more prone to stodgy droppings and food taking longer to pass through the system. I know one horse like this: she’d quite happily scoff hay for twenty hours a day, with only a little walk round her field to break it up, and when she’s ridden she tends to be really backward thinking and lethargic until she’s produced this elephant sized dropping, whereby she immediately picks up the pace and becomes more comfortable. I think there’s a combination of her being greedy, and a lack of general exercise because she’s too busy stuffing her face, means that her gut is slow and lazy. If she were mine I’d probably soak hay, use small holes nets, reduce the quantity so that she has to venture out and scavenge on the grass, and have different feeding stations around the field, to force her to move about more and to increase the water going into her. She would have a small soaked feed, not that she really needs it, but it gets water into her system. In terms of exercise, she’d probably benefit from going on the walker or a short, gentle hack before being schooled so that she has chance to empty herself which should make her more comfortable.

The horse above would be one that I would be very conscious of if she was ever on box rest or restricted turnout as I think she’d be a likely candidate for impaction colic.

Talking of which, make sure you can identify the symptoms of colic, or signs of the onset of colic, which are listed below:

If you suspect colic, then ring the vet immediately, and whilst you’re waiting for them, walk your horse round. If it’s impaction colic then gentle movement may help to initiate peristalsis and push the blockage through their digestive tract. With impaction colic the vet will administer water and laxatives via a nasal tube, and may use liquid paraffin to soften and lubricate the faeces. Painkillers are usually injected intravenously. I’ve seen vets do a rectal examination immediately and pull out most of the offending blockage, before using the other treatment to help flush the system and make the horse comfortable. That does however, depend on the location of the blockage as the vet’s arm is only a finite length and there is a lot of colon wrapped up inside a horse!

After treatment, horses are starved and monitored to see when they pass droppings and to see if the colic signs ease. Again, gentle movement helps keep the digestive tract moving so helps shift the blockage. When the vet deems that the horse’s gut is free from blockage then wet food, such as grass and sloppy hard feeds can be introduced, gradually transitioning to their usual diet over a few days. Severe blockages often require hospitalisation as they can take days to clear. Thankfully though, impaction colic which is caught early and acted upon has a high success rate of treatment. 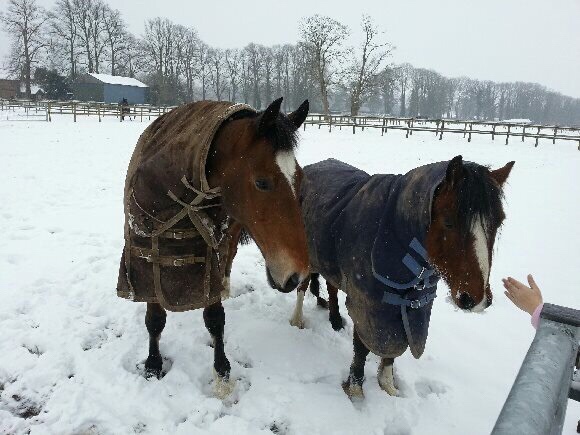