Sometimes I wonder if people should be allowed in the countryside. Those walkers who jump in hedges to hide as horses approach, or those drivers who speed round country lanes terrorising the wildlife, dog walkers, runners and horse riders.

Then I think that maybe there should be a test you have to do. And that maybe what I assume to be common sense is, well, uncommon.

This morning I set off on my ride and lead hack with two very well mannered geldings. I crossed the road and at the bottom of the lane was a stopped car, with a well dressed, middle aged lady and gentleman standing outside.

“There’s a cow out” I’m told by the lady, pointing to the young cow that was grazing on the side of the lane.

Meanwhile, a dozen other young cows lurked threateningly close to the wide open gate, tempted to go join their mate.

“It’s all very odd,” said that lady. “The gate was wide open and the chain isn’t around it.” Meanwhile, her husband is running after the cow, which is obviously running away from him up the lane …

We have to bear in mind here, that the couple have already driven past the calf before they stopped the car.

“Well let’s shut the gate for a start.” I say, looking at the woman. “Before any of the others make a run for it.”

She quakes in her high heels and mutters something about it being very strange.

The man comes back, puffing and panting, telling me he can’t catch the cow. So I suggest that he gets round the other side of it and then herds it down to where the car and I are blocking the road. He shakes his head and tells me it’s impossible.

Well, let’s face it, it isn’t. I was slightly frustrated at having two horses in my hands. There’s no way they’d have held them for me to go and herd the cow, and to be honest, I didn’t think I could climb back on, “in my condition”.

I hoped a car would arrive at the top of the lane to save the day, but when one didn’t, I told the couple to shut the gate (it was still wide open) and then to go to the nearest farm and tell them a cow was out. I wasn’t sure who they belonged to, but figured the nearest farmer would know and be able to help.

They looked very doubtful, so I tried to explain that the cow was unlikely to leave the lane and his friends on the other side of the fence so he’d be reasonably safe.

The man gingerly stepped over the mud to close the gates. They were two large five bar gates, which meet in the middle and are usually chained shut. The man pulled them two and then started walking away.

“Perhaps there’s some string (I thought the term baling twine might confuse them) on the gate opposite so you can tie the gate shut? Then the cows won’t push through.” The gate opposite was to an empty field, so I knew it wouldn’t matter if that gate wasn’t as well secured.

The man did as I told, and I think with great relief, they both scuttled back to the car and drove off. I however, still needed to get past the escapee with two horses! 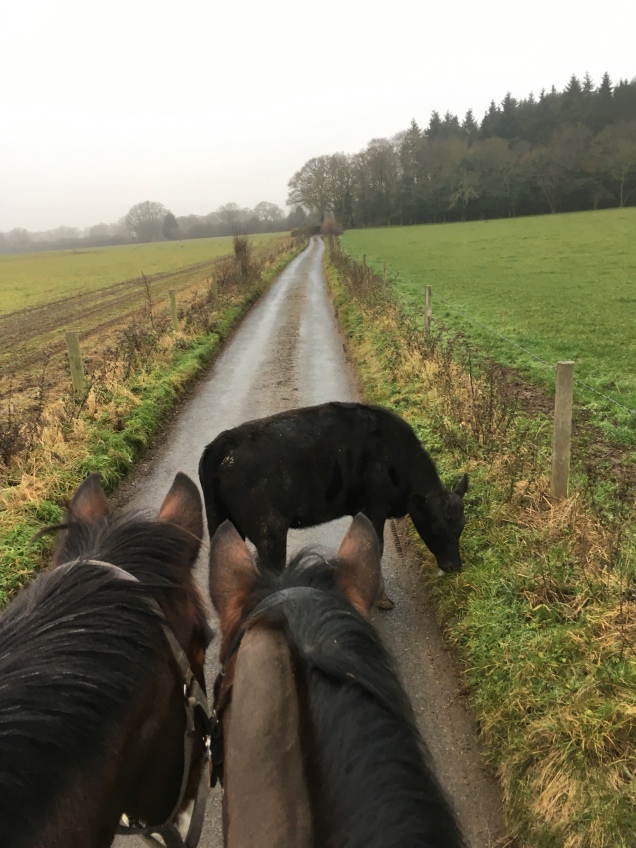 I managed to quietly sneak past the cow, who was quite happy mowing the verge, but it did lead me to wondering how or when do you learn to manage a problem like that. And how do you teach common sense? Even if you were terrified of cows, wouldn’t you at least securely close the gate immediately to prevent further escapes before contacting someone who may be able to help.

I still stand that there should be some sort of test before people are allowed to move to the country side.