Today is a significant day for Matt Black. It was six months ago today that he fractured his stifle.

The good news, is that the vet says the bone will now be as strong as it was before he was injured, so within reason he can resume normal work. Obviously his fitness and muscle tone need adjust so there will still be a rehab period under saddle.

Last time I updated you on him, he had just started being turned out in the arena – Which you can read about here. After a couple of weeks of going in the arena, Mum started long reining him (a new thing for her) to encourage a bit more gentle exercise. I think it took a moment for him to remember, but then they’ve both enjoyed meandering over poles, around jumps and perfecting their circles.

After a month of going in the outdoor arena for an hour a day, they braved it and turned him back out into the big field. The rest of the herd were starting to get into their winter routine of living in, and being turned out every morning. So a handful of quieter ponies, including Matt’s girlfriend, were turned out and once they had settled to graze, Matt was led to the gate. Initially I don’t think he really knew what was going on, but once released he did his best medium trot through the mud, across the stream and then up to the open field. He neighed loudly, making sure everyone knew he was back! They all had a canter round, watched by the other horses in neighbouring fields, and Mum looked on through her fingers. But then he settled to graze, and after an hour or so was ready to come back in.

Since then, Matt has returned to his normal winter routine of being turned out all day and coming in at night, which I think has provided Mum with some light relief. 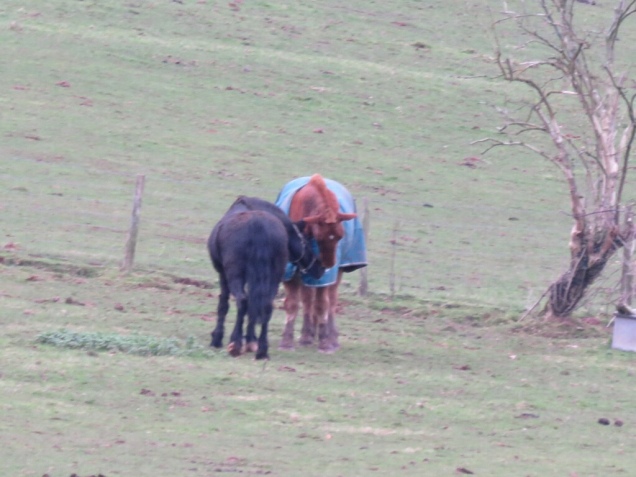 That was at the beginning of December, and the daily exercise as well as the terrain in the field has helped Matt rebuild some of his muscle. Mum was starting to get organised to ride him again. Well, to plonk a gutsy teenager on who won’t mind if he gives a buck or two. Which I don’t think he’ll do.

But then ten days ago, Matt developed an eye ulcer. Which has involved a couple of courses of eye ointments and eye drops, Bute, as well as several vet visits. On Wednesday he had his eye scraped, which was what triggered it to start healing when he had an eye ulcer three years ago. Hopefully his eye is now on the way to being back to normal and hopefully after Christmas he can be ridden again.

Mum actually brought out the saddle last week, with the prolite pad, to check it’s fit and Matt’s face was a picture – his holiday is coming to an end!

One thought on “Matt’s Update”