A few weeks ago I blogged about potential ways of storing my rosettes now that they have been evicted from the picture rail of our smallest bedroom – Which you can read about here.

Anyway, I thought you’d be interested in my solution.

For the majority, I decided that jars would be the best option; so I asked my parents to have a look in their Aladdin’s Cave for any large jars with large necks. Unfortunately, the large neck part caused a problem and they could only provide an old chemistry jar with a homemade wooden lid. I managed to fill this jar with a couple of years worth of rosettes and some medals that I’d also won at the time.

After some research online, I popped to IKEA and bought two more jars. These have very wide necks and cork lids, but aren’t particularly tall. Anyway, they were sufficient for the rest of my “normal” rosettes. 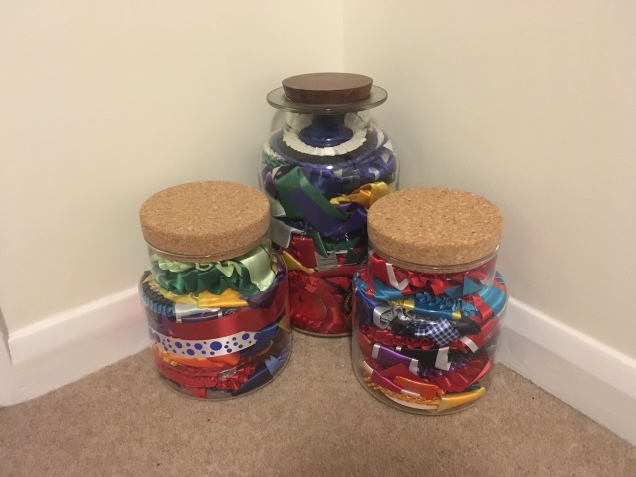 I’m quite pleased with the result, and can place them around the house as I wish, and in a few years time I’ll be able to get them out and show them to my little person, who will hopefully enjoy reflecting on them with me.

I’m going to keep an eye out for suitable jars, perhaps in charity shops or Granny’s Aladdin’s Cave.

Next up, were my special rosettes. Namely Otis’s fancy rosette and sash for winning a Dressage Series. And of course Matt’s collection from the Dressage Championships. A friend gave me the idea of a memory box, so off I went to Hobbycraft to buy the biggest box frames they had. Then I spent a happy New Year’s Eve arranging, sewing, and sticking the rosettes and sashes into the frame.

With Otis’s, I took a Dressage photo I had from the time to add to the frame, and I think it looks pretty cool. In hindsight, I should have flattened the sash before framing it, but our heavy books were already flattening out an elephant poster print for the nursery. This arrangement of the sash shows the event and the year, so needs no other explanation.

Matt’s collection was more tricky. Really, the frame wasn’t big enough for two sashes and two large rosettes. Because we had a specific journey together, I also wanted to put his qualifier rosettes in the display too, and there was no way I could have fitted a photo in too. But I have plenty of photos of him and I won’t forget our championship story. I can put a label on the back of the frame stating the event, horse and year, for anyone else’s information.

It took me a while to find an arrangement I was happy with, and didn’t look too “busy”. Unfortunately I couldn’t get the writing on the sash into the picture, but that’s partly because of the amount of writing and the size of the font. As the rosettes state it anyway, I think that’s sufficient.

I’m pleased with the outcomes of both displays: a rectangular box frame might’ve been better for Matt’s sashes, but without going down the (expensive) specially made frame route, this looks great.

What do you think of them?