The other week I was trying to focus one of my riders on their lower leg over fences, and how it likes to swing backwards. But he was more interested in jumping bigger/higher/more exciting so I made limited progress. However, he went out competing over the weekend and saw some photos of him jumping and was horrified by his lower leg.

Great – so I had his attention!

In his last lesson I came armed with string. After a short warm up, in the indoor because of the unfriendly February weather, getting my rider to be really aware of what his legs were doing as he trotted round, I brought out the string.

I tied the inside of his stirrup iron to his girth. There’s still a bit of movement, but the resistance of the string makes the rider aware of their leg movements. This means that we can train their muscles to remain in the correct place whilst supporting his legs to help him learn the slightly different rise or slightly different feel in his balance.

Through the lesson we did rising and sitting trot, worked in light seat, and then worked the canter in sitting and light seat.

The string on his stirrups made my rider more aware of how his leg wanted to swing, but because the string stabilised the position of his lower leg, my rider could turn his attention to adjusting the height of his shoulders, how far back his bottom had gone to the cantle, and position of his hands. Thus allowing him to find the right balance.

I made some other tweaks, like getting him to carry his hands, and not hollowing the lower back as he went into his light seat. He also had to have softer knees so that the weight stayed in his foot, with the heel slightly lower than his toe and the leg stable. He started to understand how this new position would enable him to ride a whole cross country course like this without tiring, and how he could still use his calves to ride his pony towards a fence without losing balance.

At the end of the lesson I removed the string and we ran through light seat in trot and canter to see if his legs were remaining in the correct place and if he felt balanced. His homework over the next few weeks is to keep practicing maintaining the lower leg position, and hopefully by practicing on the flat and when hacking it will become second nature when he’s jumping.

Today, I got a video from him asking me to critique his position over a fence! It looked much better, he wasn’t in front of his pony over the fence and they looked much more balanced, as you can see in the rather blurry still from the video below. 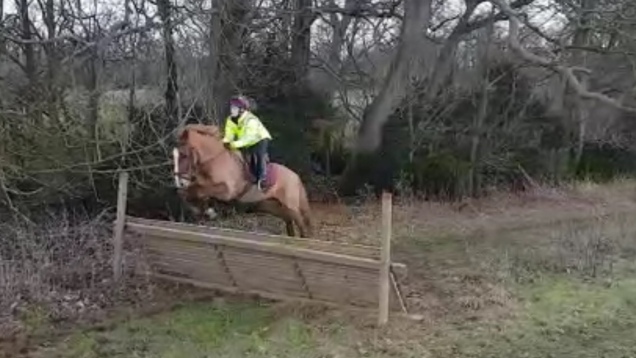 I always think that when I jumping position, the rider should look as though they would stay squatting and not topple over if their horse has been removed from under them. If the lower leg swings back then a rider will topple face first, akin to superman gone wrong! I have high hopes that this rider will correct his position and strengthen it over the next few weeks because he’s understood the importance of it in helping his pony jump neatly and in balance, and in helping him recover quickly after a fence so that he can rebalance his pony and ride the next turn on the course.