Yesterday we went to Windsor Horse Show, and for the second time watched a really fun, lighthearted equine competition that even the non horsey can enjoy. Yep, I’m talking about the long suffering husbands. But they’ll enjoy watching this because it involves weapons!

I’ve only ever seen Lance, Sword, Revolver competitions at Windsor, but I’m sure there must be others around the country.

Each competitor goes one at a time, starting with the sword section. They have to jump a small brush fence, attack a dummy on their right with the sword, striking as close to the red circle (heart) as possible. Then jump a second brush and attack another dummy, this time on their left and leaving the sword embedded in the dummy.

Next, they draw their revolver and jump a brush on the other side of the arena, firing at a balloon attached to the right of the jump. Then they have to pop a balloon on the ground, before jumping the fourth brush and popping the balloon to the left of the fence.

Once the gun is holstered (I’m using the husband’s terminology here so I assume it’s correct, based on his xbox weapons experience) correctly, the competitors pick up a lance and collect two rings from a pair of gallows (the diameter of the rings is a couple of inches) before picking up a peg from the ground.

Sounds easy, but don’t forget these riders perform the whole course in canter or gallop.

Here’s a video demonstration from YouTube to help my explanation.

Obviously the sword, lance, revolver competition has roots in the cavalry, but the tent pegging association has made the competition accessible to civilians, and they compete against the military. Yesterday, the top three places were held by civilians. What I really liked about the competition yesterday was that it is open to any horse. The winner was an Appaloosa who had quite an erratic jump and was very quick. There was also an ex polo pony, chosen I guess for his ability to neck rein and agility. Then there was also an Irish draught, and the military competitors had ex racers, thoroughbreds and warmbloods. 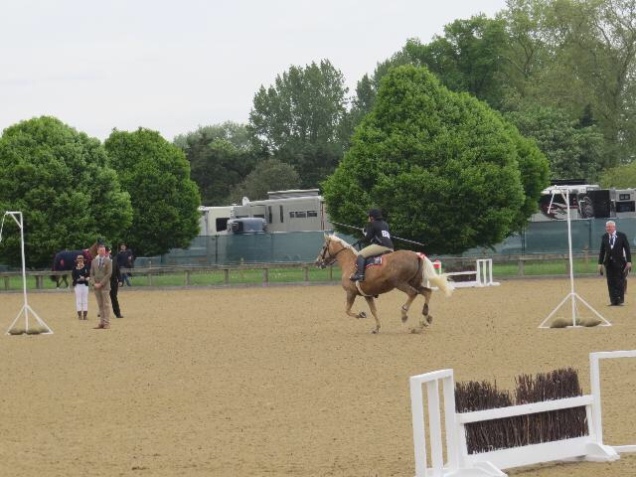 In the arena afterwards was the tentpegging competition, of which the lance, sword, revolver competitors had also entered. In this riders have the lance and try to pick up the peg from the ground. I know at one point the peg became narrower, but other than that I’m not sure how they judged it.

Anyway, spurred on by this interest, I did some research online about this unusual discipline. The British Tentpegging Association was formed in the 1990s, so is relatively immature in the competitive sphere, but there are hopes that it will soon be recognised by the FEI. The association looks after both civilians and officers, and Great Britain is the only country in which officers have to compete in uniform.

In a nutshell, tentpegging originated 2500 years ago in Asian armies, where lancers used tent pegs as make shift targets in camp to demonstrate and practice their expertise. Tentpegging as a competition and public entertainment first appeared in the Victorian era, with competition rules becoming well established by the First World War, and the Sword, Lance, Revolver competition was also developed. Then as the number of mounted units in the forces has decreased since the Second World War, civilians were encouraged to participate and compete, which led to the founding of the Association.

I’ve found an in-depth article about the history of tentpegging, which you can peruse here. I also did some reading on the British Tentpegging Association website.

I’d like to see more of this sport, as everyone can appreciate it and there’s a definite skill involved. I can also see it appealing to a number of riders, and it might also encourage more boys to continue riding into their teenage years and adulthood.