Yesterday I took Phoenix to her first competition (blog to follow) but I hacked there. It would’ve been rude not to; the venue was a ten minute walk away from our yard.

Anyway, it brought back memories so I sent a request to Mum to dig through the archives to find some photos from when we used to hack to shows.

It was strange getting changed at the yard, tacking up and feeling very posh hacking along the road. It did save on the warm up though, and it was a lovely way to cool Phoenix down afterwards. Not that either of us cooled down much in this heatwave!

I met my groom/photographer/chauffeur/babysitter there with water (or milk) for all of us before cracking on with the competition.

Years ago very few of us had trailers so we would either hack to shows or club together and hire a lorry. Our first show we took 9 ponies in a huge livestock lorry. They travelled in threes with a partition separating the trios – it’s a good job they all got on well! It was great fun everyone going together because you always had a group of supporters and there were plenty of Mums to do up gaiters at the last minute or older teenagers to give you ringside advice.

I remember at one show I was taking a friend’s pony and I wanted to do the 2’9″ jumping class. But Mum wouldn’t let me as it was “too big” (even though my jumping had improved massively since riding this mare) so my friend, who was a bit older, just slipped into the secretary’s tent and entered me for it!

Mum usually took on the role of Yard Mum, filling the car up with haynets, tweed jackets, grooming kits, water butts and buckets, headcollars, and rugs if rain threatened. She would meet us at the venue and we’d find somewhere to tie up (Mum would’ve brought baling twine too) for the day. We would be there for the first classes and then stay as long as we could, usually hacking home in smaller groups as our classes finished. We usually did the Mountain and Moorland, a working hunter class, and at least one showjumping class. Sometimes we did five classes! There was usually a clash which would involve one of us dashing between arenas to inform the judge that someone would be late.

It was a long day, but always a lot of fun!

Here are two photos from 2003 when three of us hacked five miles to a show. I think it was the first show that I hacked to. We left the yard at 7am, show shirts and jodhs under our jeans and jumpers; headcollars over our bridles like trekking ponies. Our Mothers drove behind. We arrived at the venue just after 8am, only to find that we were the first to arrive and the farmer hadn’t even taken the sheep out of the field! So after phoning the secretary and waiting for the sheep to be removed we tied up on a fence line and let the ponies graze until the show began. I’m on the grey, Partner, who I had on loan. I lovesd that pony! Initially I couldn’t jump him as he’d just run out but after two of the older girls shouting at me in the cross country field I manned up and got bossy! The smaller bay is Billy, who was my favourite riding school pony. Last I knew he was still going strong in the riding school. The bigger bay is Dan, who I loved to ride a couple of years later. He was considered unrideable and the older girls spent a whole summer breaking him in. He had an almighty buck in him though – I came off him several times that way.

These photos were taken in 2004, when eight of us hacked to a show. I think the most that ever went was twelve, which certainly filled the lanes! Although, when we hacked into town for the Boxing Day Meet there was closer to twenty of us!

Squiggle, the large grey, and his best friend Bisto, the large dark bay, led the group. I never liked riding Squiggle, who lived up to his name and was very wiggly to ride. I rode him a lot when I was backing Matt. Now, I’d like to see what tune I could get out of him with more experience but he’s in the field in the sky. I loved riding Bisto, who was a horse as opposed to a pony and you had to ride like a grown up! She did make my triceps ache though, I remember.

I’m behind on the chestnut mare, Llynos, who was a friend’s pony and a lovely jumper. She really built my confidence up while I was backing Matt. Next to me is Aries, who was slightly crazy but I loved to jump him when I was about fifteen/sixteen. He used to trot or canter sideways very slowly towards a fence and then you’d straighten up and he’d gallop over the jump, before you had to collect him and go sideways to the next fence. He was the first pony I jumped 3′ on. When his owner was at university I used to ride him weekly and got a lot of enjoyment out of getting him straight when jumping or doing trotting poles!

Behind us is a black pony, Jack, who was very sensitive. The first time I rode him was when Partner was lame and the yard was on lockdown with strangles. I didn’t want to ride boring old Gypsy in my lesson so jumped at the chance when my friend offered me Jack. Last I knew, he was enjoying his retirement in the field behind her house, in his early thirties. He is Dan’s half brother.

Next to Jack is Geraint, the chestnut. He is Llynos’ half brother and was such a thug! He was best friends with Matt and used to follow me down the field when I caught, before barging past me at the gate. To ride, he was very bargy and just used to run through the hand. Again, now I’d like to see how I got on with him. He could go nicely on the flat and when he coordinated his legs he could jump pretty well too.

You can see Dan behind Geraint, and to his left just the black nose of Bubbles is showing. She was Jack’s Mum and quite crazy to ride. In a similar way to Aries, she’d gallop over jumps. She could jump the moon though, and had a dead mouth. We were forever trying out different (strong) bits in an attempt to slow her down. When excited, she used to jog on the spot and she had the most uncomfortable saddle! Like sitting on a brick – you can only imagine the moans when she was jig jogging along! I first rode her when the yard had strangles too. This was before Partner went lame – Mum had offered him for school use so lessons could continue and in return I got to ride Bubbles. Partner’s rider booted him into canter and promptly fell off if I remember correctly.

The other side of Dan is a dun, Sandeman. I didn’t ride him until I was fifteen or sixteen. Again, he was a horse not a pony. Very forwards, and frequently bounced one stride doubles. At one show, he jumped out the ring! Mum always remembers when I hacked him with her and I refused to let him gallop up the canter track. She says he looked like a charger. I won that battle! He’s another horse I’d like to try again now I’ve got more experience.

Finally, was little Jet, who still looks great in his twenties. Mum and I loaned him when I was eight and he was very tolerant, especially as he was only young at the time. I don’t think my feet passed his saddle flaps! Mum’s friend loaned and eventually bought him – he’s a real all rounder and tried his best at everything! 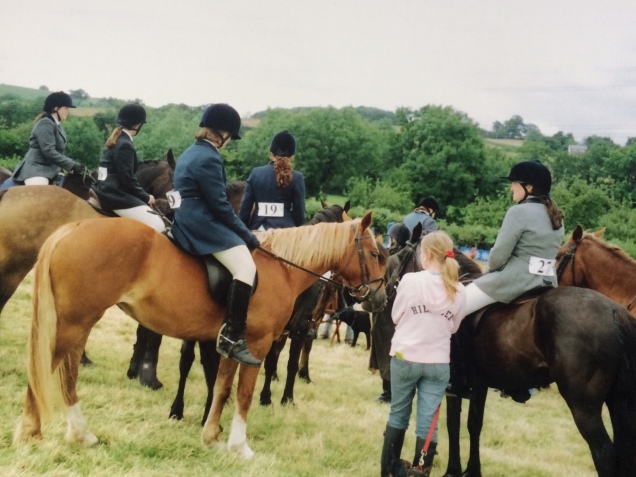 Somehow I’ve digressed from the main point of this blog, but memory lane has been very therapeutic!

Hacking to competitions is rarely done now – definitely a sign of the “good old days” but I have many happy memories of hacking excitedly at dawn to shows, cheering each other on all day then wearily traipsing back. Usually too tired for talk, but reliving each moment before turning our attentions to our sore bums and the bath we would have when we got home.