One of the horses I teach with has a tendency to drift slightly through grids. It’s not noticeable over single fences, and has vastly improved through doubles, so I wanted to test his rider’s accuracy to ensure she wasn’t allowing him to drift around courses. 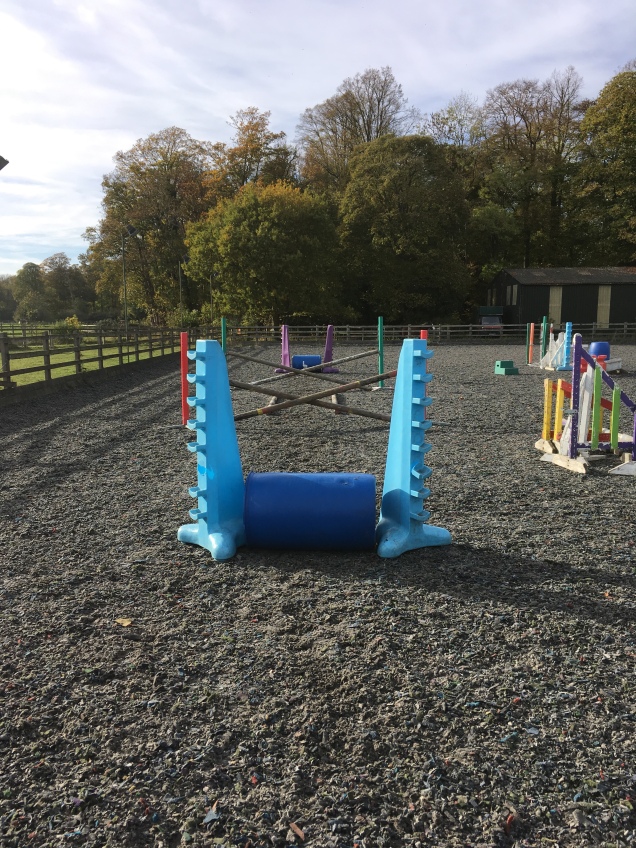 I began with setting up a two stride double, with tramlines to focus both horse and rider on straightness. We kept the fences as cross poles too, to help them get central.

Once they were riding through the fences comfortably, I began to ask the questions. One stride before the first cross, I added a skinny fence. With no short poles, I had to use a barrel. This meant that the pony might back off the skinny jump, as well as trying to dodge round it. However, as it was the first fence in the grid my rider could set them up in a controlled, balanced canter and focus on her accuracy and the cross poles would follow naturally.

As predicted, the pony backed off the barrel fence, chipping in a little stride, so his rider had to ride positively to prevent him squeezing in three strides between the cross poles. They repeated it a few more times until the pony stopped backing off and felt more confident.

Next, I added a second skinny barrel jump at the end of the grid, one canter stride away from the second cross pole. As this question came up rapidly after the cross jump my rider couldn’t have a lapse in concentration through the grid or else her horse will have either drifted past the skinny, or will chip in a second stride. She also needed to pick up on any slight deviation from straight.

They jumped the first three fences neatly, straight, and on the correct stride. However, they drifted slightly right through the grid which gave the horse the perfect opportunity to slip past the last jump. The next time, my rider corrected their line throughout the grid, by opening her left rein and using her right leg. Because the horse was less able to circumnavigate the skinny fence he chipped in a stride, so disrupting the flow of the grid.

To overcome this, my rider had to recover quicker from the cross poles, and ride forwards and positively to the barrel fence to give her horse the confidence to take the distance on one stride. It took a few tries, and they only managed it from one canter lead, which suggests we have work to do on their weaker canter lead. Which fills my next couple of lesson plans!

Adding a skinny into a grid keeps horse and rider switched on, and ensures the rider doesn’t become a passenger once they’ve entered the grid of fences. It highlights any drifting by horse or rider, and by working on both canter leads you can see if there’s any asymmetry. For example, if a horse is stronger with their right hind leg then they will push more with that limb over the fence so the horse will always drift left over jumps. However, this horse drifts fractionally right in right canter but drifts significantly right in left canter, suggesting that the cause of his drift comes from the fact his body is crooked to the left, which is exaggerated in left canter so drifting becomes more apparent.

The grid can be made harder by removing the tramlines and converting the cross poles into uprights to make it harder for horse and rider to stay on their line. You can then remove the wings from the barrel jumps to make it easier for the horse to run out. If you can negotiate that in a fluid and confident manner then you know you’re riding straight and accurately!