I’ve got a little anecdote to cheer you up on a dreary Friday.

You know those lovely properties with long drives and electric gates? Well it’s not a problem entering, you just hop out and type in the code then the gates open and you drive out. When you leave, the gate sensors recognise you’re a car a open automatically.

However, when you’re on a horse, it’s a different story. For some gates I’ve had a little key fob which I just press to open the gates. Some I just get on after going through the gates. For others I have to rely on being let out and then just get off to key in the code and get back in. One horse I walk right up to the keypad, lean down to enter the number, and hope no cars roar up behind us on the road!

Last week, I saw the nanny in the house before I went to tack up one of the horses I ride out. I asked her if she could let me out when I had gotten onto the drive. Or avenue, as it it lined with trees. However, as I was tacking up I decided to swap the stirrups over as I hadn’t been able to get them just right. This took me a few minutes and as I let myself out of the stable block onto the drive, I could see the large iron gates were already open.

The horse I was riding is lovely, but on the way out on hacks his mind does tend to be on his stable and dinner. When we’ve had a trot and canter he’s up for it. Anyway, we ambled down the drive and, when we reached two thirds of the way down, the gates slowly started to creak shut!

With a couple of pony club style kicks, we broke into joggy trot, closing in on the gates… as they closed just in front of our nose!

“That’ll be four faults for a refusal!” shouts this voice behind me, accompanied with a laugh. Two gardeners had put down their tools to watch me race to the gates! The rather portly one, still laughing, made his way slowly to the large iron gates. Of course, he couldn’t open them from the inside but somehow (and I repeat somehow) he squeezed between the wall which the gates are affixed to, and the wooden fence bordering the property, and went round to the other side of the gates, and typed in the code to let me out. And let himself back in in the process.

I’m glad I provided them with a couple of laughs, but I’m also very glad they were there because I don’t think I could face the embarrassment of going back to the house to ask to be let out! 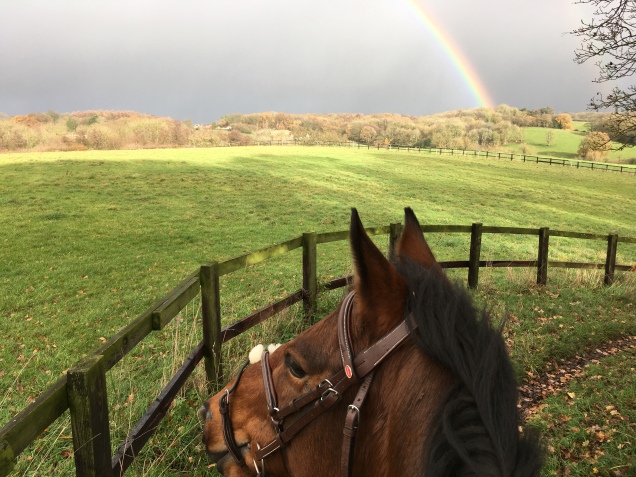