I feel like I’m always banging on about straightness, symmetry and its importance in helping a horse work without injury and as efficiently as possible. And the same goes for the rider too!

But when you look at the German Scales of Training straightness is the penultimate focus. 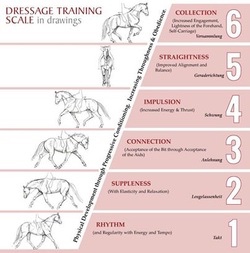 With all my clients we aim to get the horses and riders working as evenly as possible on both reins, which I think was highlighted by a pony and her rider a couple of weeks ago. The pony usually drifts right through grids and over combinations but for some reason during this lesson she was drifting fractionally left. It was the same from both canter leads and as it was only ever so slight we weren’t overly concerned, but I was pleased that our work had strengthened the mare’s weaker side that she was almost stronger on it.

I’ve had two clients recently with whom I’m focusing on straightening their crookedness out as their lack of straightness is hindering their ability to produce rhythmical gaits and stay in balance round circles and school movements.

When I first met the first horse a few weeks ago he was quite stuffy in his trot, unwilling to go forwards and very behind the leg. He has various problems with his legs so we aren’t looking at making him the next Valegro, but he needs to build up strong, correct muscles to help stabilise his pelvis and reduce the risk of another injury occurring. His rider lacked confidence in both of their abilities and I think lost her way with what schooling she should and could be doing.

I found that the horse was a bit of a left banana, drifting out through his right shoulder and he hung against the wall on the left rein. As a result, his rider was sitting to the left too. I straightened her up, and made her more aware of her asymmetry and when she slipped into it so she didn’t block his attempts to straighten his body. Over the first few lessons we used the long sides and easy turns to focus my rider on her horse’s straightness. On the right rein she had to encourage a little more bend whereas on the left rein she needed to discourage any more left bend than necessary in his neck so that he began to listen to her outside aids and she was less inclined . Our circle work are large circles, focusing on maintaining the rhythm and forwardsness.

We’ve worked on their transitions to get him listening to her aids, encouraging him to stride out in his work, carrying the hands level, and riding on a longer rein so he stretches his neck out more. We’ve touched on leg yielding to improve his suppleness and to make him less reliant on the arena wall and more responsive to her outside leg.

With all of these exercises we keep going back to straightness and riding the long side to realign everyone. As the pair are getting straighter and the horse is building muscle more symmetrically, the rest of their work is improving. The horse’s trot stride length is increasing, he’s getting closer to tracking up, he’s managing to maintain a trot rhythm more consistently, he’s less on the forehand, and he’s becoming more supple around all the school movements. So we’re starting to establish the first two Scales of Training, but we couldn’t have done this without addressing their crookedness first. Hopefully over the next few weeks we will move onto improving the canter as I feel that will help loosen him over the pelvis and improve his trot gait, and we can further the straightness and the quality of their trot. But each lesson will still keep straightness at its heart because I feel it’s so important to improving this particular horse.

Another client I have, where straightness has been pivotal, is a young horse and her rider. Neither have done much schooling so we are starting with the basics. However, before we can even look at steadying the tempo and creating a consistent rhythm, we need to focus on their straightness! The mare practically leg yielded to the right almost constantly. She’d ride a few strides straight but then suddenly dance right. It was much worse on the right rein, but on the left rein circles they drifted outwards on the open sides. Because the mare is young and green, I didn’t want to make huge changes or make an issue of things. I asked my rider to think about how she was sitting, and if she could feel both her seat bones evenly. She could feel her left far more than her right, so I got her to slowly transfer her weight from her left seat bone to her right. Almost immediately the mare started walking in a straighter line. We did some simple turns, focusing on the seat bones staying fairly even, a slight increase onto the inside one on turns, but not much! Imagine sitting on a yoga ball; if you sit too hard onto the inside seat bone the ball will shoot out from under you. As soon as the mare started to drift right, I got the rider to correct her by using her right seat bone. No leg or hand, just a gentle correction.

We then took this up into the trot, using the long sides to realign them as necessary, and worked on large circles with my rider being more aware of her right seat bone. As soon as my rider was sitting more level, the mare began to relax and soften her tense little frame. The trot improved because she was more relaxed and the strides less choppy. Homework for this pair over the next few weeks is to establish the straightness and more symmetrical walk and trot by lots of short sessions working large and on big circles, because as soon as the mare gets stronger by working straighter, and is more confident we can begin to improve their suppleness, create a consistent rhythm, and then begin work on transitions, serpentines and start to look at the canter. Again, if we hadn’t addressed their crookedness we would be unable to work on the rest of the Scales of Training because the mare would find it difficult to maintain a consistent rhythm in her gaits, wouldn’t become supple in both directions, and would struggle to accept a contact because the weight in the reins wouldn’t be the same.

Whilst I still agree with the Scales of Training in theory, I sometimes feel each stepping block should be considered more equally, to encourage riders just starting out on their training journey to have an awareness of the higher levels, so they pay more consideration to their horse’s straightness and impulsion, even if they are like this young horse I’ve just started working with. 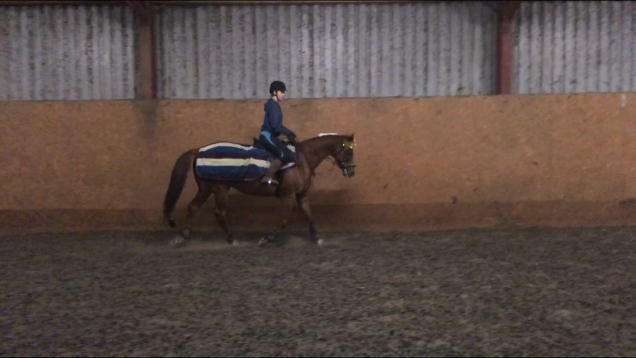