I’ve blogged about it before, but I get so frustrated with the lack of child friendly dressage tests. So many British Dressage and Pony Club tests have movements above a young rider’s comprehension. Then the judge’s feedback goes over their little heads, and I feel that they don’t really benefit in any way, shape or form. Which means, unfortunately that dressage is less popular amongst young riders (with the exception of that Scottish girl who scored 93% or something outrageous. See this week’s Horse and Hound for more details).

So when a friend approached me a few months ago with the idea of running online dressage competitions with tests written for children, and focusing on using a language that they understand and using appropriate school movements (for example, many children can canter, but are unable to canter a circle at E, or pick up canter over X). And of course, promoting fun, with feedback that they understand. 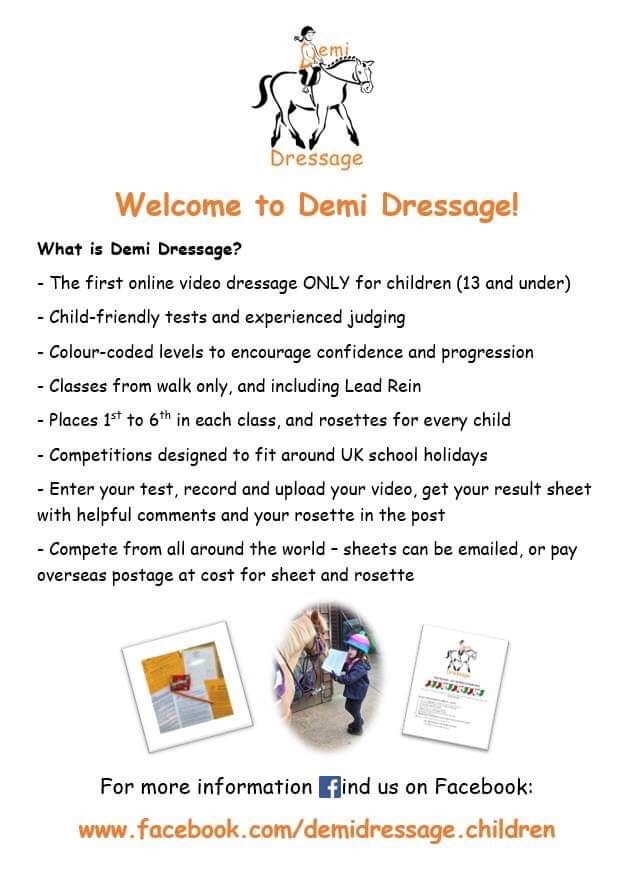 Understandably, I jumped at the chance to be involved, and so Demi Dressage was born. My involvement is fairly basic; I double check the tests as they are written, and then judge the entrants at the end of the month.

There are five levels, which I think covers children of all abilities, and provides them with the groundings to enter a prelim test at the top level. And yes, I have shamelessly copied the description of the levels from the website!

For the Christmas competition we had a two year old on the lead rein doing the yellow test! I found it lovely to see the wide array of ponies and children entering, and all seeming to have fun. Two competitors who really stood out were brother and sister on their family pony. The sister rode off the lead rein, videoed by Mum and with the test called by Dad. The brother was led by Dad, had his sister calling for the first half of the test, and Mum videoing, with the baby strapped to her chest, and calling the second half of the test when sister got bored (Mum, I salute your multi-tasking abilities!). Anyway, it was really nice to see the competition as such a family affair.

Kids love getting rosettes, regardless of colour (I certainly remember the disappointment when I came home empty handed), so Demi Dressage feels it’s important that every competitor receives a rosette. Each class has rosettes to 6th place, every other child gets a special rosette, and there are extras each month for “Best Fancy Dress” or anything else which we feel needs applauding.

We had great fun judging the videos, making sure we were fair, provided positive and constructive comments, focused on where the children were in their riding, and gave feedback which the children understood. I tried to give each child something to focus on next time, as well as saying what I was impressed with. For example, “try to ride from letter to letter to help improve your accuracy marks”, or “practice your sitting trot to help with your canter transitions”. I was really pleased to hear back from one parent that she was very impressed with the feedback her children had received as it was exactly what they were working on at the time and not “dressage jargon”.

With the focus on making dressage fun for the kids, we’ve put in movements such as Around The World and Half Scissors, going over or between poles, and in March there’s going to be a special one-off Prix Caprilli competition. It will run slightly differently, with only three classes (lead rein, walk and trot, walk,trot and canter) and be open to under sixteens, instead of the usual age limit of thirteen. Rosettes will go to tenth place, and there are prizes to be won! Then in April there will be monthly competitions which will run as an accumulator series, and a champion awarded in September. With a sash! And prizes for all the runners up!

There’s another Demi Dressage competition coming up in February, timed to coincide with the school half terms, and I’m looking forward to judging this test! A lot of kids take a break from riding in the winter, so the test is nice and short to encourage them to get back into it even if it’s just for a week, and involves some fun elements such as Around The World, and dropping carrots on the snowman’s nose. Intrigued? Well borrow a pony and get entering! I would if I could …

So if you have a child, or know of one, who would enjoy this, please introduce them to Demi Dressage and spread the word for this fantastic fledgling of a business. Their Facebook page can be found here!