Phoenix has had a quiet month in January with one thing and another, but hopefully she’ll soon be back on track.

Just before New Year I had a fabulous lesson, where she was getting the idea of relaxing in trot immediately after canter, and things were all slotting into place. The following day I had a lovely hack and then she had a couple of days off while we went away.

That following week she was tense again to ride. I was disappointed, and felt we’d regressed in her training. Then at the weekend she bolted going into right canter. At first it was just a quickening and some tension, but the more transitions I did the worse she got.

Right canter has always been her weaker canter, and in retrospect throughout December I was finding that I was being put into position left after right canter.

Simultaneously, mounting had become more stressful, with her being tense, sometimes having her back up as I mounted, and jogging off. I felt she was beginning to make negative associations with the school and being ridden. On hacks, she was perfect, as usual.

It took me a week to try and get to the bottom of it. Was she being emotional? Was she struggling with the winter balance of feed and turnout? Was she getting too fit? Was she in pain anywhere? She wasn’t lame, but I did think she seemed restricted in her left hindleg. When she had her monthly massage, extra tightness in the muscles in her left hindquarter was noted.

I backed off the canter work, trying to improve her right bend. She’s a trier, and she really tried to give it to me. But something was hurting because every so often she’d bring her left hind forward and then stop, as if wincing. It was this point that I decided she needed some form of physio or chiropractic work.

Phoenix is a naturally uptight character, so I felt a physiotherapist would be most beneficial initially and once her muscles had been released, if she was still not quite right, a chiropractor would be more effective with less resistance from the tight muscles.

While I waited for her physio appointment, I did some ground work to keep her brain ticking over, and practiced mounting and just walking around. I wanted to focus on reducing her anxiety in the arena. Anxiety which stems from her expecting pain, I think, but hopefully by reminding her to stand during mounting and then just walking around she would be in a better frame of mind when I start working her again. Phoenix is a quick learner, and after a couple of sessions she felt her normal self around the mounting block.

The physio session was really interesting. Whilst not showing a response to pressure along her back, the physio denounced Phoenix to be very guarded. Her posture has changed in the last couple of weeks, and it took the physio quite a lot of work to release the deep muscles over her back and hindquarters, particularly the left. By the end of the session, Phoenix was flexing her back properly and had a much more relaxed demeanour. Her eyes had softened and she looked happier. I just felt guilty it had taken me so long to work out what the problem was.

She had a couple of days off, and I felt she seemed happier in herself, with a softer eye and with a better posture. I lunged her in the snow over the weekend (the joy of being barefoot!) and she looked considerably more comfortable in her action, with less tail swishing and less resistance to the right.

A week after physio, I got back on. Her back needed a break and chance to recover. I was a bit anxious about how she would behave under saddle. Mainly because I really wanted this to be the solution to her tension. The first trot she was coiled like a spring, but the more work we did the more she relaxed and felt like the old Phoenix. She just needed to work and realise it wouldn’t hurt.

The next day I took her for a hack, and she seemed perfectly happy. I’m so glad! She needs a couple more days of just walk and trot work, before introducing brief periods of canter. 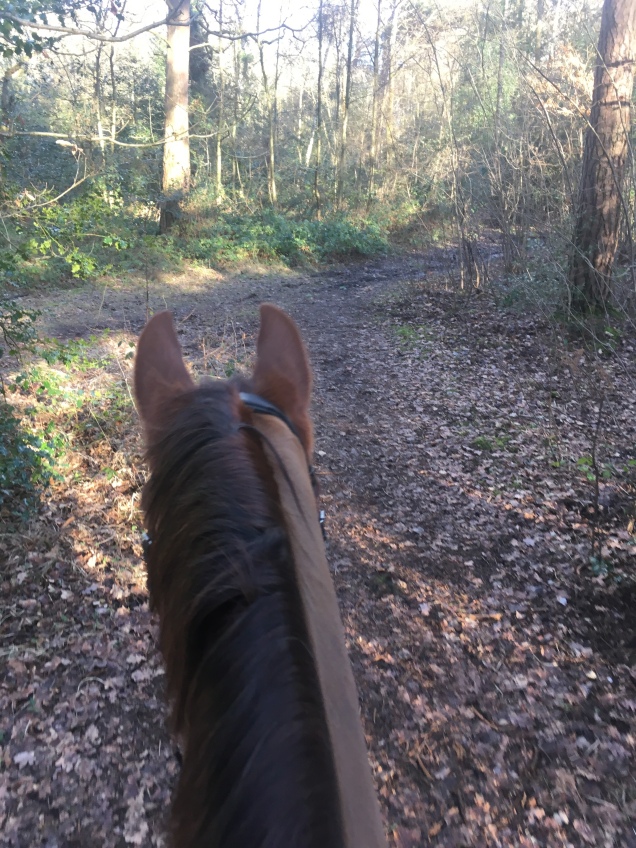 She has a follow up appointment in a couple of weeks which I very much hope shows an improvement in her muscle tone.

I’m also organising for her saddles to be checked (the dressage one seems to be moving… which may explain why she was happier cantering on hacks when I was using my jump saddle. Duh!). She seems to be taking after Otis, the number of saddle checks she’s needed so far. Until then, I’ll stick to the jump saddle as she seems much happier.

I’ve had a lot of time to think about the cause, or the root of the problem, and how I can prevent it reoccurring in future. If I’m honest, I think there’s been a need for physio for a while. Perhaps I should’ve done it before I started riding her. She’s naturally uptight anyway, so muscle tension isn’t immediately obvious because there’s an element of it all over. She has monthly massages, which worked on the same areas as the physio did but on a superficial level. Which highlights the fact equine massage is an excellent maintenance tool (otherwise I think I would’ve hit this problem earlier) but physio or chiropractic treatment is sometimes still required to correct misalignment or deep tissue problems. The increase in Phoenix’s workload in December meant that the underlying soreness went from slightly uncomfortable to painful for her. Combined with a change in the fit to her saddle, which exacerbated the soreness, meant that throughout January Phoenix has been trying to tell me very clearly that she’s not happy. I was just a bit deaf though, and it took me a while to see the wood for the trees. I’ll listen harder next time Phoenix, I promise!