Two poles is all you need for this exercise to improve your horse’s straightness.

Unfortunately, for whatever reason, a lot of horses carry themselves in a crooked way. For example, with their hindquarters always to the right. When I start working with a horse who is crooked in their way of going I check the rider’s position, symmetry and if they have any history of injuries which could cause them to have a weaker side. Then I cover topics such as saddle fit, chiropractic and physiotherapy treatments, dental history to make sure we rule out any of those causes.

If a horse is allowed to work in a crooked way then muscles develop asymmetrically, which can compound the problem.

I find that using poles as tramlines can be really beneficial in teaching both horse and rider what straight feels like. The physical presence of the poles can be more effective than asking the rider to do too much correcting and straightening of the horse as the effort involved in applying these aids can twist the rider’s seat, which doesn’t help the horse go straight.

In a session where I’m planning to use tramlines, I warm horse and rider up focusing on feel and straightness. I don’t necessarily want my rider to start adjusting their horse, but I want them to gain an awareness: is the horse holding their head to one side, or their hindquarters to one side? Is it always held to the same side? I tweak my rider’s position and aids so that they are minimising the crookedness, and are as symmetrical as possible.

Then I get them to trot between the two poles a few times, so that the horse is comfortable with the poles, then I roll them slightly closer so they are fractionally wider than the horse. Now, when they pass through, the horse will have to straighten their body so that the left hind follows the track of the left fore, and the same with the right legs. The rider should then feel the change in the horse’s way of going, which will help them recreate the straightness elsewhere in the arena. We repeat this until there is less of a change in the horse’s body before, during and after the poles, because they are working in a less crooked manner.

Next, I add in transitions. Horses who are crooked tend to wobble through transitions, so riding a transition between the poles encourages the horse to stay straight. Horse and rider begins in trot, and once the hindquarters have entered the poles, ride a transition to walk. Usually the first couple of times there’s a clunk on the pole, proving the horse has lost straightness. As they exit the poles, you sometimes see an exaggerated drift because the horse is so reliant on the poles to keep them straight and almost lose their balance when their support is removed. It’s a very good exercise for teaching the rider a feel for a straight transition and straight horse.

Once the downwards transition is feeling straighter and more balanced, I repeat the same exercise with upwards transitions, from walk to trot. Riding the transition between the poles usually encourages the horse to utilise their hindquarters and push up into a springy, active trot because when they are straight they hindlegs work more efficiently as their stepping towards the horse’s centre of gravity. The rider learns the feel for a more active transition, and a straighter way of going. Again, you might get the wriggle after exiting the poles, but as the horse improves their balance whilst being straight, they will be less dependent on the tramlines.

Soon, the rider should be able to ride their horse on two tracks and in a straighter frame without the help of the tramlines, and when they do travel between poles there is no change to the rhythm or balance of their gait.

So long as the horse and rider can strike off into canter on the long side, on a specific canter lead, you can begin to ride trot to canter transitions between the tramlines, which most horses find quite tricky as they usually drift through the outside shoulder. As with the walk and trot transitions, the canter transitions will improve the rider’s feel for straightness, their awareness of the importance of maintaining the outside aids, and improve the quality of the transition.

The mare I used this exercise with over the weekend likes to hold her hindquarters to the right and her head to the left, so after warming her and her rider up focusing on minimising the crookedness in walk and trot before we started using the tramlines. It took a few trots through for the mare to begin to maintain the straightness without the poles – she drifted as she came out from between the poles initially. Once we started to ride transitions between the poles I noticed that the mare stayed softer in her neck and started to engage her hindquarters. This mare is very good at learning an exercise, so we only needed to do it a handful of times before moving on, and continuing to practice keeping her straight elsewhere in the school. With all this focus on straightness, my rider’s hands became more even, which helped the mare stay straight. For this pair, cantering between the poles had the most effect. The mare finds it difficult to stay together in the canter, tending to run and wiggle along; the tramlines encouraged her to be straighter, and subsequently her rider could begin to balance her more easily and then the canter looked stronger and more correct. We’ll be doing more work using tramlines as part of more elaborate polework exercises to further improve the mare’s straightness and quality of her gaits so that both horse and rider can work straight and efficiently, with less risk of overstressing and straining one area of her body. 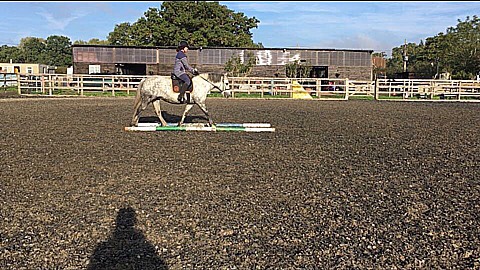