I had a day, purely coincidental, this week where I ended up riding a number of client’s horses in lessons.

I am of the mentality that a good instructor can teach without demonstrating, and that a rider gains much more satisfaction and self belief in their ability if they achieve a goal with their horse rather than sit on a ready made one. However, I also believe that an instructor should be able to sit on a client’s horse and make some benefit to the horse and the content of the lesson without the rider going away feeling inadequate.

The first pony I rode was one I’ve ridden infrequently, but we’ve been working on her suppleness, and whilst it’s improved hugely, I feel that we’re only connecting her 80%. The hindlegs are working actively and she’s far less on the forehand than she used to be, but something’s missing from the overall picture. My rider is doing everything I’m asking her to, and the exercises should be helping them. I wondered a couple of weeks ago if it was the fact they were both learning which was holding them back. If my rider has never, for example, experienced shoulder in, then when asking her pony she may have woolly or clumsy aids, or not be assertive enough (“I think my leg is in the right place” sort of thing) or she may not be asking until the pony gives it, and she may not know how to adjust her aids in response to what her pony is doing. If I were to ride the same movement, knowing what I am aiming to achieve, I will be more likely to teach the horse to understand the aids, and I can then help my rider perfect her aids – some horses have buttons which need pressing slightly harder, or in a different place than textbook.

So I sat on this pony and immediately found that she was much heavier in the right rein. Far heavier than she looks to be! Which was a revelation in itself and something I will be focusing more on. This led me to discover that the reason we aren’t getting her truly connected, bridging, working over her back, was because she’s locked on the right side of her neck. I did a fair bit of work on shoulder on and getting her to stretch and release her neck, eventually she understood and became lovely and light in both reins, straight, and was swinging over her back. I had done a running commentary throughout, so when I got her rider remounted she could ride through the exercises I had just done, knowing where and when to apply aids, getting the correct response, and feeling the correct feel in her pony. The tricky bit will be when she tries to recreate this next time she rides, but hopefully because her pony understands and my rider is more assured of her aids, they will get it.

The next horse I ended up riding; we were in one of those situations where my rider doesn’t fully understand, and her horse was taking the mickey of her unsureness. Straighter than he used to be, he’s still a crooked horse, drifting through his right shoulder. The result to my rider is that her left rein is always dominant and her right is a bit airy fairy. So we’ve been working a lot on using the outside aids to turn. On the left rein, this means she has to keep a firmer right contact and remember not to use the left to steer round the corner. But as she’s applying more right rein her horse is leaning against her, waiting for her to release the right hand and take over with the left. There’s an element here of my rider not being quite strong enough to stay firm until her horse rebalances himself and stops leaning on her right rein. I felt she would have also benefited from seeing the process and net result, which a lot of visual learners do. So I sat on and basically did exactly as she was doing, but I’m a bit stronger in my core so could hold up her horse’s right shoulder until he yielded. My right leg is probably a bit stronger to, which will help him understand the question I was asking him. That is, to move away from the outside aids. It took him a few attempts, and a few strides where he really tried to push through my right rein, but then it clicked. I rode for a few more minutes, making sure my rider could see what I was doing, and how I was asking her horse. Then she got back on, and we repeated it so that she could put the theory into practice, and because she got the correct results, she had more confidence in her understanding and ability.

A client had suggested I sat on her young horse a few lessons ago, so this ride didn’t come as a surprise to me. The horse is young, and young horses often benefit from more experienced riders sitting on from time to time. We have been working on her suppleness over the last few lessons because she tends to swing her hindquarters right instead of using the right hindleg properly. I started off slowly, finding the right buttons, and then did a few minutes in sitting trot, making very small adjustments with my seat and leg so that she spent more time with her hindquarters directly behind her forehand, and I could support her round turns and circles before she swung her quarters to help her understand how she should be carrying herself. We introduced leg yield a couple of lessons ago to help teach the mare to move away from the leg, but also so that we could start to improve the degree of bend she was giving round turns, and to encourage her to bend throughout her whole body. I rode some leg yield, and she tried really hard, but you could tell that leg yielding to the left was much harder because she had to push with her lazy right hindleg. Her rider watched, and could see the asymmetries, which will hopefully help her connect what she feels in the saddle to what is actually happening. And she will also be able to ride the exercises appropriately to her horse’s asymmetry. We work horses evenly on both reins, but if there’s a weaker rein it is often beneficial to do a few more circles, or whatever movement you’re riding, to help loosen them and strengthen them.

After the leg yielding, the mare started to feel more even behind, and more active, so I turned my attention to encouraging her to lengthen her stride and open up in the shoulder so her trot didn’t feel so choppy. A rider who is used to a choppy stride may find it harder to push a horse into a long, more fluid stride, so my rider could watch the benefit to her horse’s gait, and next time the horse knows what they should be doing so will be more receptive to the rider’s aids.

This client didn’t get on at the end because we ran out of time and the young mare had done sufficient work for that day, but I’m sure they’ve both got lots to put into practice over this week.

It’s not part of my teaching plan, to sit on every horse, but it does provide very useful insights as well as helping fine tune a horse and rider so that they work in unison, and I’d definitely recommend coaches have a feel for the horse that they are teaching with at some point as it furthers their understanding of how the horse ticks. 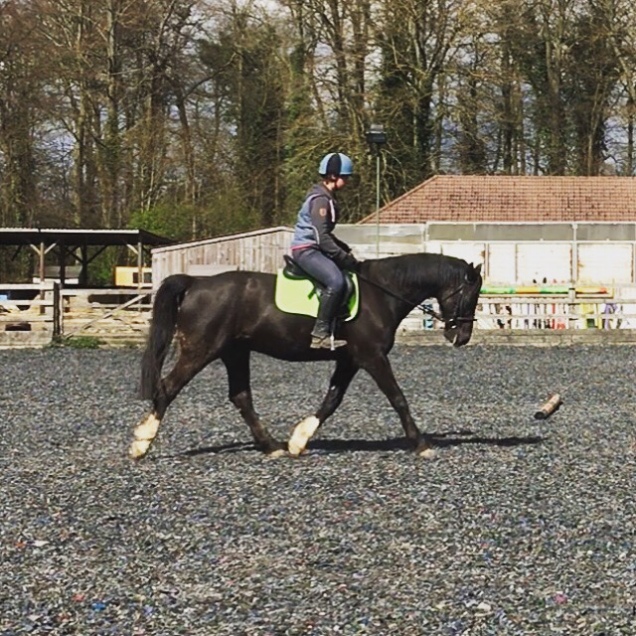