This week I was given the challenge of teaching one of my young riders her trot diagonals. I laid the foundations in her last lesson, giving her some homework to practice before taking the plunge this week.

Before I teach a child their trot diagonals I like them to be able to maintain trot whilst rising. Some beginners do a double bounce when using their legs. They also need to be able to differentiate between sitting and rising, and for rising to be autonomous. Before even introducing the idea of diagonals I use a simple exercise to introduce the double sit to change diagonal. With my young rider trotting around in an up-down-up-down rhythm, I ask them to change the rhythm to up-down-down-up-down, which tests their balance and core strength as well. I also get them familiar with the sequence of legs in trot and feeling the movement of the legs.

This rider had been practising her double sits, but has fallen into the trap of sitting for three beats. I established that she could do it correctly when she applied herself, but I felt that she didn’t see the point in perfecting the exercise. Sitting for three was close enough, wasn’t it?

She needed to start to see the bigger picture. Why I was making her do a double sit. She is also mature for her age, and likes to have the explanation for everything, so I knew I’d have to discuss it in depth. But on the level of a six year old.

I began by checking she knew the sequence of the legs in trot, and then told her that on circles and corners of the arena the inside hind leg has to work hardest to keep the pony trotting. So to make her pony’s job easier we should stand up when that leg is moving forwards. I then checked she’d been listening earlier by asking which other leg is going forwards at the same time that the inside hind is (the outside fore, if anyone’s having a blonde moment).

My little rider correctly identified the front leg, so we then watched her pony’s shoulder moving. If she couldn’t see it I was going to put a strip of tape along the shoulder blade to emphasise the movement. But she could see the shoulders move in walk.

Next, we went up into trot and studied the shoulders moving in trot. I did say she might be able to feel the hind legs moving forwards, but the visual cue is easier for children to process and link steps together.

I asked my rider which front leg was moving forwards as she rose. And therefore which hind leg was. Then I asked if she was helping her pony, or making it harder for her. I find that linking a movement to a pony’s welfare encourages children to pay attention because they don’t want to hurt their pony so will be more likely to practice and perfect what we’re doing.

Once we’d established the shoulder that was going forwards when she rose, and if it was the right one or not, we talked about how to change the trot diagonal so that she was on the correct one. Of course, it was the double sit exercise we’d practiced last week!

Now she still does the odd triple sit, but there was more determination in my little rider to just sit for two beats and to change her diagonal. With practice, she’ll crack it, but now I know she will try harder at it.

We spent the rest of the lesson doing quick checks. For example, every time they changed the rein I asked what did she need to do – change her whip and sit for two! Then when they had a sneaky walk I asked her to check her diagonal. It’s important that a rider doesn’t get used to being told they’re on the incorrect diagonal, but rather by asking them if they are right or wrong as they will become more thoughtful and independent riders, as well as fully understanding the concept. Also, it’s important to choose the moment to correct trot diagonals. Don’t do it before canter, or on a tricky school movement. Wait until they can devote their full attention to the outside shoulder and double sitting.

This rider took to my explanation, and seemed to really understand it. I l her that her Mum will be able to tell if she’s right or wrong, so hopefully World War Three doesn’t break out when they’re practising! Some children need more explanation than others, but I think by breaking it down into small steps of verbal explanation, visual guides, and demonstrations, you can pinpoint when it starts to go over their head. Then you can change tact, or leave teaching diagonals until they have fully grasped the previous step. 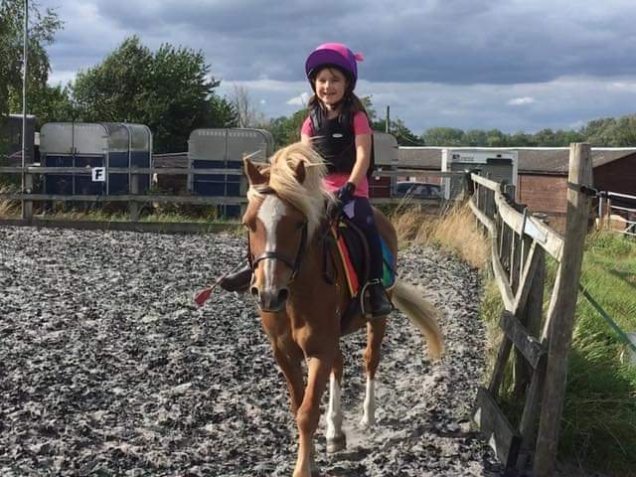