I’ve planned a series of polework and gridwork clinics over the winter, approximately one a month, at a beautiful local showjumping venue. They’re designed to run independently, so people don’t feel they have to attend all six, and I’ve given each date a theme. This helps me plan, and also helps riders chose which clinics to come to as they have a rough idea of what we’ll be working on.For my first clinic, I chose straightness as the theme.I wanted to work evenly off both reins as symmetry improves straightness, and often riders find it harder to ride straight when turning off one rein more than the other, so in order to ensure everyone had a chance to improve their stiffer rein, I used the centre line. 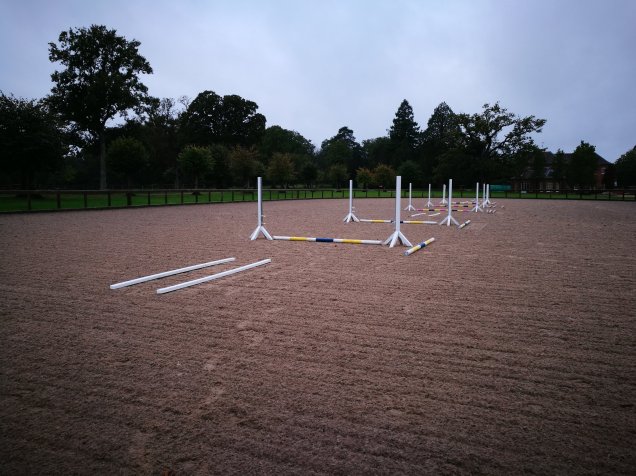 I laid two tramlines just onto the centre line, to focus the riders on their turn so they didn’t drift, and were set up straight for the grid. With a fairly short approach I laid out a jump, followed by another one canter stride away. The third jump was two canter strides away, with a pair of tramlines in the middle to correct horse and rider if they’d drifted. Then there was a fourth and fifth fence one canter stride apart. The fifth fence was an oxer, and there were tramlines on the landing side and the then just before the turn at the track.The tramlines ensured they started and finished straight, and stopped any cutting of corners after the grid, so improving the getaway.I warmed up all the riders by getting them to trot through the grid with the poles on the ground, alternating the reins they’re coming off. Initially, all the horses had a good look at the arrangement of poles, but after a couple of goes, they started going straighter, my riders were channelling them forwards because they’d stopped looking down, and the horse’s stride length opened and rhythm became consistent. The riders could also start to think about whether it was easier to turn off the left rein or the right rein and make corrections.We then cantered through the poles from both reins. All horses will struggle to get the distances while there are no jumps, but as they got straighter and more forwards they started to work out how best to place their feet. So long as the horses are going through in a positive, rhythmical canter, I’m happy at this stage.I built the grid up slowly, starting with a cross as the first jump. The centre of the cross meant we knew if there was any drifting on the approach. The second fence was also a cross to help straightness, and then the tramlines corrected any drifting on the getaway and over the rest of the poles.The third jump was an upright, and once they’d jumped it confidently once, I made it into an A-frame. The apex emphasised the centre of the jump, and encouraged the horses to be neater over the jump. Of course, the horses and riders back off this slightly intimidating set-up, so I encouraged the riders to sit up after the second cross and ride positively in order to get the two strides. Once the horses have jumped it a couple of times it doesn’t cause any problems. The fourth jump also became an upright. With some groups I also made this into an A-frame, but if I felt that the first A-frame improved the horse’s technique over subsequent jumps I didn’t bother. And finally, we built the fifth fence into an oxer.Everyone found that the tramlines were incredibly helpful at helping both horse and rider stay straight, and the crosses highlighted any drifting so the riders’ knew how and when to correct over the last three elements. They could all feel the difference in their horses as their straightness improved because the distances were easier and the hindquarters more efficient at pushing the horse over the fence. They also landed in a more balanced way, ready for the next obstacle. When the horses were going straighter the riders could feel the effects of any twisting by themselves through the grid, which helped them fine tune their position.

All in all, it was a great, rewarding morning, with lots of progress from each partnership. Now I need to plan next month’s “Gears to the Gaits” clinic!