One thing being a Pony Club instructor teaches you is to think on your feet and teach multiple abilities in one lesson.This is what happened to me today. Although, I did have the advantage of knowing most of the children and having been briefed on them all a couple of days in advance so I could make a plan.

The secret, I think, to managing multiple abilities in one group, is to have a layered lesson plan. This means that there is something for each rider to do or learn. For the lower level riders part of the content will go straight over their head. And for the more able, some will be revision. But you can keep them involved by asking them to demonstrate or explain to the others.

I put four yellow cones in the corners of the arena, to ensure none of them were cutting their corners. The older ones needed the odd reminder when they got complacent, and the younger ones liked having a visual point to steer round.

They all warmed up as a ride, with the led pony at the back so that they could walk before his leader went into cardiac arrest. They could also cut the corners and stand in the middle to rest without disrupting the flow of the ride. Whilst they trotted I made individual positional corrections, and then I started teaching them to turn with their shoulders and look where they are going more. They had to imagine there were headlights on their shoulders and they had to light up the track in front of the pony. This is something even the youngest could grasp. I asked the more experienced ones which direction was easier to turn so that they started thinking about their riding and could make their own improvements. Of course, I asked the youngest two too so that they felt included, and as I think it’s important to encourage a flow of conversation. The fact that they picked left or right at random was neither here nor there. They spoke to me, and felt part of the lesson which was the important part.

They cantered individually. The older three trotted circles before the canter, the boys were led. Canter wasn’t the main focus of the lesson, and working individually meant I could tailor it to suit everyone whilst remaining safe. If I hadn’t cantered the more advanced three would have felt short changed.

Jumping is where it gets tricky to manage different heights, so I laid out two exercises. On the three quarter line I put three fences, and put a pair of cones on the approach, getaway, and between each jump. This was to focus the riders on steering straight throughout the exercise.

On the centre line I laid three trot poles, then a fairly big gap, before a jump. Again, with cones to help them stay straight.

The trio of jumps were for the more competent jumpers, whilst the trot pole formation was for the lead rein and nervous ones.

My instructions and aims were the same, but I could build the jumps up to accommodate the two groups. The hardest part for everyone was steering straight after the jumps, and my poor cones got some battering there. Because we had the focus of the jumping on their steering the height of the jumps became irrelevant.

The three jumps were used for the two riders jumping over 50cm. For the final go, I left it so the girl on her new pony could have a more confident turn and ended on a positive note, before putting it up a bit higher for the more able rider on her last turn.

My very nervous rider started off confident and trying to keep up with her friends, going over the warm up three, but as they got bigger she diverted to the other set up. Which was fine; she didn’t feel belittled because she’d chosen the smaller exercise, yet was happy that she’d been comfortable enough to try the bigger exercise.

The trotting poles were aimed at the younger boys; the poles tested their balance and the jump was minute so they could start moving their hands forwards over the fence before we develop their jumping position. The ponies just trotted through, but the boys liked having a different shaped pole to go over. 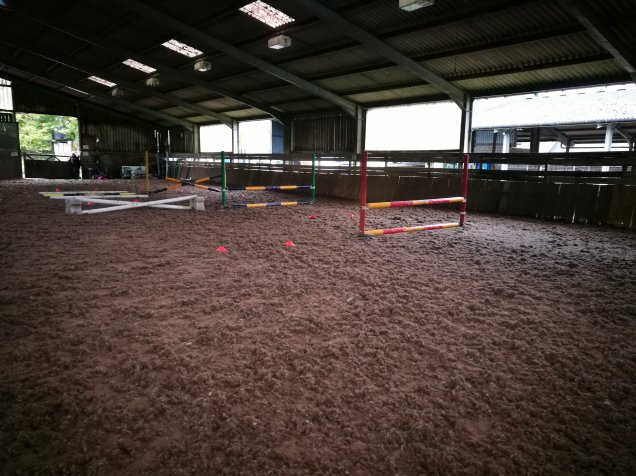 I think all the children took away the same points from the lesson; such as turning their shoulders in the direction of movement, and the importance of steering straight when jumping. Sure, the little ones were only be following my directions without really understanding the concept, whereas the older riders were starting to grasp the theory and can now begin to apply it at home by themselves. The cones gave them all instant feedback; the older ones cringed when they knocked a cone over, realising they needed to work harder to maintain straightness. The younger ones just grinned and giggled as they trotted between the cones with the help of their leaders and hopefully they will remember riding between cones in the future for when they’re taking more ownership of their riding.

Developing layered lesson plans definitely takes practice, and they’re not the easiest to deliver, but they’re the most rewarding when you have so many happy and satisfied riders and parents.