When you have an undesirable behaviour in the horse, such as refusing jumps, napping etc it can be so difficult to find the cause.

Once a horse has had their saddles, feet, legs, backs, teeth checked for ill fit or injury, very often the unwanted behaviour is labelled as a ‘behavioural problem’ and has very negative connotations. All to often I see aggressive reactions to the unwanted behaviour, which often compounds the problem.

Once you’ve identified that there’s no physical cause for a behaviour then it’s a matter of understanding the horse’s mental state. Horses react to the current situation, they don’t plan in advance to cause trouble or refuse to comply with their rider. An interesting article went round social media last week which explained this well – take a look here.

So if you have a behaviour, such as napping or rearing, and you’ve found the underlying cause to be an injury or poorly fitting saddle; you’ve fixed the physical cause, but your horse still naps, then it is caused by their mental state and in order to correct the behaviour you need to get inside their head and do it slowly.

I’ve just started working with a horse who started refusing or grinding to a halt before a fence and cat leaping it. After some weeks of troublesome jumping, a small injury was diagnosed and he was subsequently rested and then brought back into work. However, his behaviour whilst jumping continued.

Unfortunately, he can’t speak English and tell us the problem, but we can listen and respond to his body language. I believe that the horse had pain association with jumping, because of the injury, and then because he was cat leaping he wasn’t comfortable jumping, regardless of the fact his injury had healed. Whilst he had his injury, he’d have had a physical limitation when jumping, and if faced with jumps beyond this ability (even if they were within his usual ability) he would have lost confidence in both himself and his rider. This creates a vicious cycle of him not wanting to jump, despite the fact he has been given a clean bill of health.

Because he hasn’t wanted to jump, he’s become rather backwards thinking on the flat, so the first thing I did when I rode him was get him thinking forwards. I’ve given him very light hands, to support him as necessary, but in no way acting as a handbrake. Every transition has prioritised over him responding to the aids, and going forwards, even if his head isn’t in the ideal position. I want him to move his body as required in order to do the requested movement so that he realises that it doesn’t hurt and that he can do it. We can tweak movements in the future to improve his way of going.

This week, to help his jumping, we used canter poles to encourage the canter to stay forwards, and then once he was taking me into the poles, we added a jump to the end of the poles. The jump wasn’t too small that he would trip over it, nor was it too big to be outside his comfort zone. The poles kept the canter forwards, regulated his stride and positioned the horse in the correct place to take off. This would give the horse some positive experiences over the jump, so rebuilding his confidence and ensuring he didn’t have any twinges from jumping awkwardly. As the horse became bolder, I lengthened the poles so that he wasn’t quite so close to the jump on take off. Starting with the poles closer than ideal and lengthening the distances slowly stopped the horse even thinking about chipping in before the jump.

Once he was confident in cantering three poles to a jump with no strides between, I removed the third pole, so that the two poles set up his canter, and he just had to keep the momentum going for one stride before the jump. We repeated this work off both reins, until I felt he’d done enough. He needed a certain amount of repetition to build good associations with jumping, but not so many that he became tired and be more likely to falter.

Next time, the plan is to build a simple related distance. There will be two poles on the approach to the first jump, as we’ve already done, which will put him in a good canter and give him a good jump over the first element. Then he has to maintain that canter for two strides before the second jump. Then we’ll increase it to three strides between the two jumps, then four and so on. The purpose of this is so that he learns to jump the single fence without poles to help, but by setting him up at the beginning with poles we can ensure he isn’t likely to fail or back off the jump. Again, the jumps won’t be big, but I may make them uprights instead of cross poles to give him something else to think about. Not having them high means that as well as not having any pain association from jumping awkwardly, his injured leg will get stronger and hopefully he’ll stop anticipating any pain from that site. Then we’ll continue along this theme with other grid work type exercises until he doesn’t have negative associations with jumping, and is confident in his own ability again. 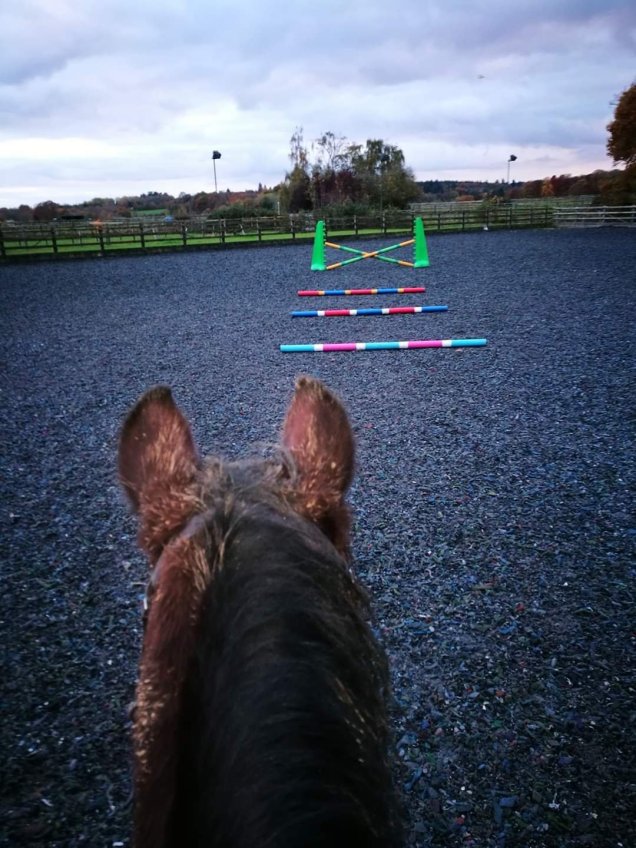 With any “behavioural” problem I think it’s best to identify the triggers for the behaviour and then work on calmly and quietly giving your horse a few positive experiences so that the habit is broken, and they begin to build trust in their rider and themselves in that situation, then you can adjust the situation; for example if your horse naps at a particular spot out hacking on their own, ride, long line or lead past the spot in company until they have had some good experiences there, before perhaps riding first past that spot in a group instead of following their friend, and then venture there on your own. Strip back the environment/activity and provide emotional support from your horse from others, people on the ground, anything, and then as the event becomes calmer and stress-free, take away their support slowly as they become more confident and less reactive to that set of triggers.