I had the third of my winter clinics this weekend, and for once the rain stayed away!

The theme was accuracy, which developed the straightness work of the first clinic, using skinny fences and jumping on an angle.

In the centre of the school I placed the skinny fence. Then I strode out three horse canter strides to a jump in front and behind the centre jump, which meant there was a grid of three fences with three strides between each jump. A pony would get four strides between the jumps.

Then, from the skinny jump, I walked diagonally, again for three canter strides, and built another fence. The line I walked meant that the fences were jumped on an angle. I added another three fences so that they formed two diagonal lines of three fences, with the skinny jump in the centre. To help my riders find their line, I used narrow white rails as tramlines. 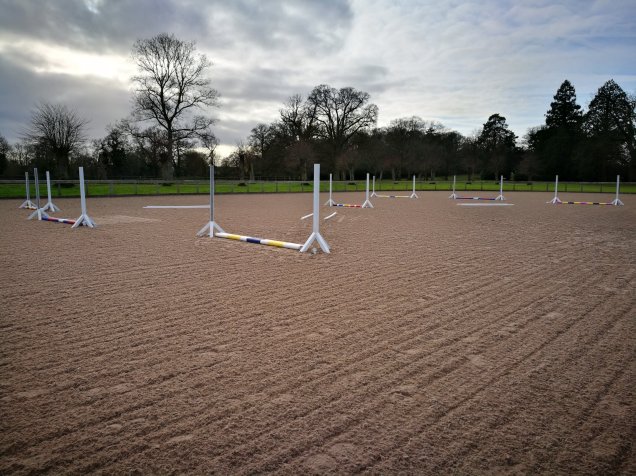 I warmed up the riders in trot and canter, getting them to ride the lines so that the horses stopped looking at the tramlines or wobbling as they stepped over the poles on an angle. The riders could also focus on how they rode their corners on the approach and getaway without the complication of having fences.

Once everyone’s lines were flowing over the poles, I put up the fences. I had the skinny jump as an upright and all of the others as crosses to help guide my riders’ eye to the middle of the fences. We started by jumping the central line. Having the skinny jump in the middle meant that riders had to maintain their straightness between the jumps, not letting their horse drift slightly. As long as they had an even rein contact with legs draped evenly around their horse, this line flowed nicely and was fairly straightforward. Horses sometimes back off a narrow fence, so in order to keep the line flowing, the riders had to be positive between the first and second fence without chasing them out of their rhythm.

If a rider steers predominantly with their reins, they end up with a snake like effect, wiggling between the jumps, so this is a useful exercise for encouraging riders to use their legs to steer the body of the horse and keep a stiller hand.

Next, we progressed to riding the diagonal lines. The secret was to ride deep into the corner before the first jump, and focus on the final cross. Think of riding the fences as one combination, rather than separate elements, as this helps the line flow. The horses naturally back off when jumping on an angle as the ground lines can be a bit deceiving, and they usually fitted in an extra stride. Once my riders had gotten their eye in, they could use more leg between the fences to encourage their horse to take them to the next fence. The riders had to commit The reins were usually quieter by now, and the horse travelling between leg and hand, which improved the shape they made over jumps, improved their rhythm and tempo, and the rider became more in sync with the horse and the lines rode more fluidly and accurately, I put together a course. Jump the centre line, turn left and jump on her diagonal line followed by the other diagonal line and finally back up the centre line in reverse. This turned the focus to linking the jumps together, getting a good jumping canter immediately, using all of the arena to set up the line.

The improvement in all the horses and riders was great to see; the jumping rhythm improved, and both horse and rider were committed to their jumping line, and jumping in a straighter fashion over the fences, with a cleaner bascule because they thought they were jumping on an angle so the take of point wasn’t as clear as it could have been. Definitely a good challenge for anyone who feels they they or their horse drift whilst jumping or between elements.

One thought on “The Accuracy Clinic”