Last week marked two years since we brought Phoenix home so I took a moment to reflect upon that time.

It’s been an eventful journey, but certainly since the spring it has been a predominantly positive one. When I got her she was physically six, but mentally four years old. Now, she’s eight years physically and probably closer to seven years old in her head.

She had done very little apart from being backed, lightly hacked under saddle or led from another horse, had no concept of canter, and was very suspicious of life.

This year, she has been perfectly behaved on sponsored rides, jumped cross country fences confidently, competed showjumping and represented the riding club (I’m still not over having the final fence of the second round down and losing the ticket to the champs!). She’s confident, powerful, has a great, springy jump, and is a lot of fun to jump. 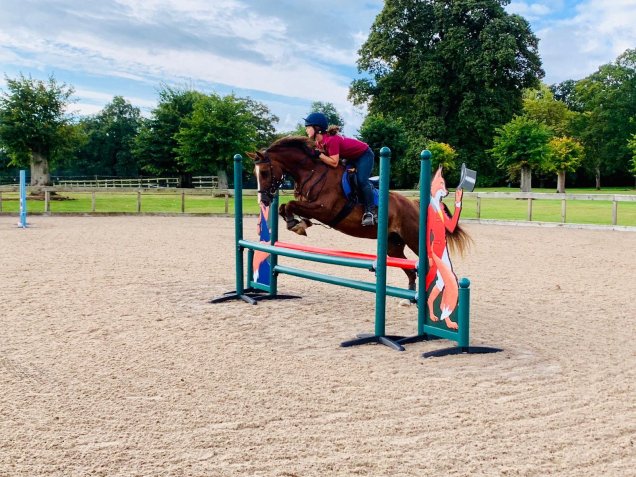 Dressage wise, we still aren’t really where I anticipated us to be after two years. She’s so sensitive, and has bad days when she’s more tense than a bow just before the arrow is released. She also needs to be shown an idea or concept and allowed to think about it until it becomes her own idea, which slows down the teaching process. Although she’s a quick learner. However, unlike last winter, I can use the canter work to relax her, loosen her up, and fatigue her. Which is a definite improvement!

Phoenix is still great to hack, although on windy days I tend to err on the cautious side as she can be silly, especially on her own.

I’m still working this enigma of a horse out, in terms of how to reduce her tension. She’s living in overnight at the moment and is far happier than last year. She isn’t racing round the stable waiting to be turned out, and has even been spotted lying down asleep in there! However, some days I mount and she’s like a ticking bomb who’s brain has fallen out of her ear, and I have to spend twenty minutes replacing the brain and defusing the bomb. Cantering her helps, but you have to get her in the right frame of mind to canter for it to be beneficial. Lunging doesn’t diffuse the situation as she’s beautifully relaxed then.

Initially, I thought that when she’d had two days off she was tense and buzzy to ride, but this theory was disproved when she was scooting from my leg and blocking over her back when I’d worked her eight days in a row! And this week she had the weekend off yet was lovely and settled to ride on Monday.

Now, I’m beginning to think it’s the weather. She’s more uptight when it’s wet and rainy, blowing around her hindquarters. She accepted the exercise sheet for a couple of weeks but then decided any rustling on her back was terrifying and she must run away from it. Only giving her a blanket clip has definitely helped matters here. In Princess Phoenix’s world, she’d have an elaborate indoor arena for the winter.

I think I can guarantee to have a calm, sensible ride with Phoenix’s brain firmly stuck between her ears on a mild, still winter’s day when she’s been worked regularly in the days leading up to it. Wet, cold and windy days are just a survival challenge!

I think Phoenix has now got herself an all round CV. She’s had positive experiences of most things, and is definitely improving in terms of her acceptance of the aids and I feel I have a stronger relationship with her. It may have taken longer than I expected, but I think she’s got a solid foundation to build upon now. We’ve come further in our journey than we think we have.

What are my goals for the next year? Without putting too much pressure on either of us, I want to consolidate the novice dressage movements – we’re at the showing her and letting her think it’s her idea stage – and get out and do more dressage. I wanted to affiliate her originally, so that may be on the cards. I’d like to do a one day event with her, but she still needs a bit more experience cross country. Otherwise, it’s just continuing to give her a good education, and for me to continue to enjoy her, as she is my downtime and I need to make the most of it before she’s borrowed by the next generation (you wouldn’t believe how soft, gentle and tolerant of a certain little person Phoenix is).