I adapted this exercise last week for my clients to improve their canter transitions.

When you aren’t working to a dressage test, or set of quick directions, it can be easy to spend too long preparing for a canter transition, aborting at the first corner, and then in the downward transition it’s easy to spend half a dozen strides recovering and finding their balance.

I wanted my riders to be in the position that they could strike off into canter with instant preparation, and can ride into a balanced trot immediately. After all, once you get to elementary level, the movements start coming up very quickly!

I laid out five trotting poles on the track on the long side; with a fairly short distance between each one. I wanted the horses to be on the verge of collecting over the trot poles. With the mare who struggles to get the correct canter lead I placed the poles so that the last pole was at the quarter marker and she could use the corner to get the correct strike off. The other, more established horses, had the poles in the middle of the long side so that the canter transitions were in a straight line.

I worked each combination through the poles until they were balanced, and the trot had become more together and uphill, with increased cadence. Then we added in the canter.

We repeated the exercise a few times, moving the transitions so that they were closer to the poles.

The result was that my riders started riding more quickly, and I don’t mean rushing; the time between preparing and riding the transitions, and then reacting to the outcome, decreased. The horses became more responsive to the aids and then more active in the transitions.

The trotting poles engaged the hindquarters, which helped the horse push upwards into canter, so it felt like a pop into a steadier, more powerful canter. The mare who tends to run into canter suddenly began to almost jump into it, which resulted in a less harum-scarum canter.

Having the trotting poles in the near distance when riding into trot encouraged the riders to sit tall and hold in their core so that the horse sat on his hocks and didn’t fall onto the forehand after a couple of strides, unable to contain all this energy. Often a horse and rider will go into a powerful, energetic trot, pushing nicely from behind, but after a few strides they both seem to collapse and lose energy, so losing the quality of the trot as they bowl onto their forehand. However, the poles require the horse to maintain the initial trot for longer so builds up their strength and balance. Again, the horse and rider have to be thinking and react quickly to correct any loss of rhythm or balance.

Having to ride a downwards transition before some poles doesn’t give a rider the opportunity to accept a sloppy, unbalanced transition, nor does it mean they can do it “when the time is right”. The time is now, and they have to make it right. If they do get an unbalanced transition, for whatever reason, the looming poles encourages them to react and correct it; which is very important around showjumping courses, and so that the next dressage movement is not impeded.

I was really impressed with the improvement to both the horse’s transitions, the quality of the canter and trot, and of the positive, quick thinking way that my riders were now riding. 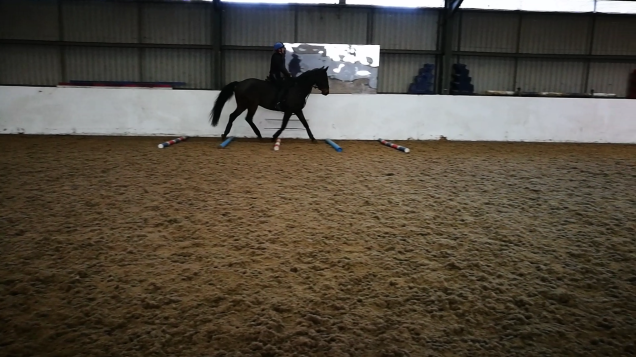