We went to a competition today, and I tried out my new mounting block. Unlike last time, it was very successful! On our last outing I had a plastic two step stool (I may have mentioned it previously) as I didn`t want my hip dislocating with another dodgy leg up. But upon mounting, I put my foot in the stirrup, prepared to step up and the stool broke! I was left hanging off the side of my poor horse! So this stool is a bit more manly. And I would be very concerned if I managed to break it. It`s a recycled wooden step ladder which was originally 6 foot tall, but had been sawn off so only the top two steps remain. I think it will suffice.

Our joking about the step ladder reminded me of a classic situation from a few years ago that my Mum and I observed. We had decided to go to Broomes for a show; it was one of my 4 year olds first shows, and the first one which we travelled alone. I`d entered Riding Club Horse or Pony; mainly for experience so we weren`t hoping to win, just to behave ourselves! It was going quite well, no spooking and reasonable work when we all rode together, and then we were pulled in.
In first was a little girl on a grey pony. Nice little show pony, and deserved to be there. But then came the clincher. The judge told us all that before we did our individual show we would be required to dismount on the correct side and remount on the off side. So she turns to the little girl in first as says, “when you`re ready”. But this girl wasn`t. This exercise wasn`t in the showing manual her Mum had taught her. With a bit of help from the steward, she managed to complete the exercise without too much of a problem.
I was third. So I dismount confidently, thinking “It`s a good job someone told me yonks ago that it`s good for your horse`s back to switch sides regularly…” But this horse is a bit bigger than my 14.2hh! I think we managed it fairly respectably, see below. 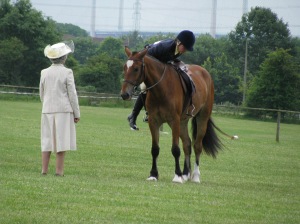 But just down the line … was a lady who Mum had already eyed up as a potential candidate for injecting some humour into serious showing. She was a  rather large lady, riding an equally rather large horse. I`m sure you can guess what happened next! Firstly, she asked if she had to do the exercise, and was told, in a polite way to get on with it. So she signalled to her husband on the sideline, who came running in with a step ladder! He held the step ladder whilst she dismounted gracefully.

Then of course, comes the remount. Equally gracefully, she climbs up the ladder, and with her husband hanging off her other stirrup, she hauls herself on. Meanwhile, I along with the two little girls in line, and the rest of the spectators sniggered away.

Individual shows performed, we were all lined up again, and we were a respectable 3rd. In addition, I received the “best senior rider” rosette. I think this meant more to me than the placing. And then of course there was this little anecdote, which got retold many times in the next few months! Just for good measure here`s a picture of my gangly four year old.