For some reason today whilst driving to the yard the image of an ex-polo pony’s leg popped into my mind. His leg, along with many other lumps and bumps, has a series of circle shaped scars in two parallel lines.

As I drove home I realised that firing, both pin and bar, is a fairly archaic process and I’m sure many younger equestrians wouldn’t know what it is.

The process of firing tendons is used on a horse with a chronic injury, such as a curb or bowed tendon. A red hot probe is used to burn, or cauterise, the tendon to cause an acute injury with serious inflammation. Unlike other injuries, this cauterisation produces serum which flushes the site of injury without degenerating the site of injury. It is thought that this accelerates the healing process due to an increase in blood flow to the injury site.

The big negative of firing a horse is that they need six months to a year to recover, but the hope is that they can perform to their potential for longer. Racehorses are the usual victims, as the firing causes scarring or for white hair to grow which is aesthetically displeasing to those in the showing or performance world.

Bar firing has been banned in the UK, but it has been known for horses to be exported to Ireland to be treated as many trainers felt that other therapies weren’t as effective. With the development of stem cell therapy firing has become much more uncommon.

I’m not an expert on the process of firing tendons, but it has been described to me as barbaric and hideous. From my research I’ve found that the process itself appears to have helped healing and not caused further problems in the future, but the main reason it is viewed as an inhumane process is that many trainers fired young horses as a preventative measure in the hope that it would strengthen the legs and stop them developing splints. Of course the development of other therapies and the advances of science help to prove or disprove treatment theories. 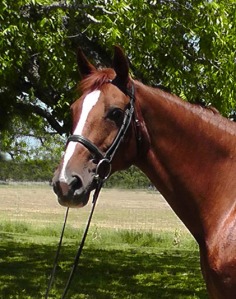 The head should be intelligent, alert, and display a good temperament. It should be in proportion to the rest of the body. I find a small head ungainly, and a large head makes the neck appear undermuscled and weak, particularly on a long neck. The eyes should be large, kind, and set well apart, giving them a wide vision. The ears should be mobile, curving to a point. The ears display the horse`s temperament by being pricked forward when he is looking at something and engaged, and lying flat back when he is irritable.
The mouth should have enough room for a bit, and the tongue should not be too fleshy – but this depends on the breed. The jaw should be mobile, and the horse neither have an overbite or an underbite as this affects their grazing ability. The lips should be soft, and the nostrils large so that ample air can be taken into the lungs. This is important for an eventer when galloping across country, or a Thoroughbred racing.
The jaw and poll should have enough room for flexion, so that the oesophagus isn`t restricted when the horse is working to a contact, particularly in dressage.
I am a sucker for the dished face of Arabs, finding the Roman nose too heavy for many horses. Except the Shire. I also like a kind eye, feeling that I can engage with the horse and “see” their personality.

Going along to the neck; the horse should have a good topline, but this can be disguised with excess fat. The neck should be long and elegant, but it also serves the purpose of helping the horse balance. The neck should flow onto a sloping shoulder; if it is set on too high, the horse has a “swan neck” which is worsened by an overdevelopment of the under muscles in the neck, further problems caused by this are short shuffly strides, and a tense jaw. But that`s another story. If the neck is set on too low it gives the appearance of the horse being on the forehand, you feel like you`re sat “at the top of a slide”, and the withers always look prominent with this type of neck, and it`s difficult to build up a correct top line.
If the neck is too long it will be weaker, and put the horse on the forehand; whilst a short neck shortens the strides.
Weak necks are my bug bear; I feel they are so unsightly! But there is nothing worse than an overly cresty stallion!